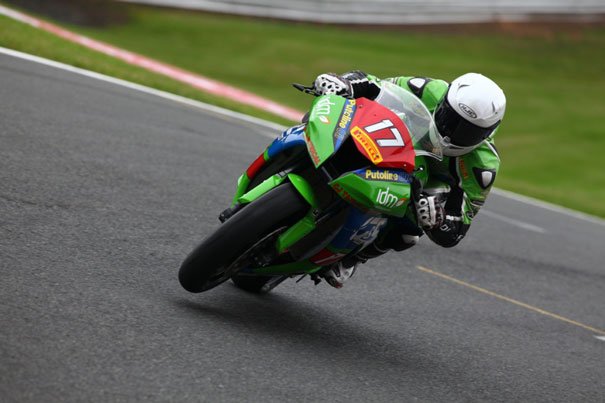 Because of the forecast for Sunday threatening heavy rain all day both Superstock races were brought forward to Saturday afternoon. Dominic Usher began his race from a fifth row grid position and got away well to a good start.

He began to steadily move forward and became embroiled in a four way battle for position which continued throughout the 14 laps. By lap eight he was up into ninth place but was involved in a tussle with Gavin Hunt, the pair exchanging places at every opportunity until Usher made the break and pulled away slightly to complete the race in ninth place to pick up seven championship points bringing his total to 18 and moving him up the rider standings to 14th.

Still struggling with his hand injury, Tom Fisher began from row 11 and got away to a good start. he made progress though to 27th on the first lap but was soon to be hindered by his hand injury as the race progressed. He dropped back to 31st mid race but managed to keep going and battled through to 28th at the chequered flag.

It just goes to show that practice makes perfect as this is Dutchman Kevin Van Leuven’s second outing at Oulton Park. He really got to grips with the track and rode a superb race battling for position in a group of six riders finally crossing the finish line in ninth place just 0.085s away from James Lodge who took eighth position. This fine result moves Kevin up the rider standings to 11th on 38 points

I was disappointed with my qualifying position as I couldn’t find the perfect set up but we made a few tweaks before the race which paid off, I am so pleased with my result which proves that the technical issue from Thruxton didn’t make a blind bit of difference to the bike’s performance.”

“We had a good weekend, Usher was on it today, he was battling in a large group and came out on top scoring a top 10 finish. I am so pleased for him especially after the trouble last weekend.”

“If nothing else this fine result proves that the technical issue made no difference to the performance of the two stock 1000 machines. Tom is still having a problem with his hand which affects his performance.”

“He tries hard but the hand goes numb after a few laps and he just cannot power the bike out of the corners. Kevin is really getting to grips with the stock 600 Kawasaki.”

“Because he didn’t have to spend so much time learning the circuit he was able to concentrate on his start procedure and he got away very well in the race. He rode a superb race and was faster in the race than in qualifying.”

The next round is at the Wyberton based team’s home track of Cadwell Park over the August Bank Holiday weekend. The three riders will be seeking some good results and the visit is more special for Kevin as he is keen to get to grips with the famous Cadwell mountain.