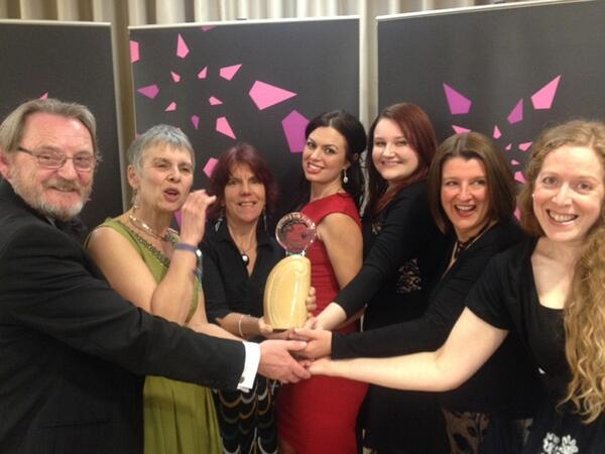 The best of the region’s tourism industry were celebrated at the Remarkable East Yorkshire Tourism Awards on Thursday evening at The Spa in Bridlington to which more than 400 people attended.

Prizes were awarded to over 13 organisations from the region in the food, accommodation, attraction and event sections. The Beverley Folk Festival was selected out of a record number of entrants to be one of the 71 finalists in the awards. It was up against some tough competition with 6 other finalists in its category of Remarkable Tourism Event.

It was delighted to have been picked as a joint winner of that category with Hull’s Freedom Festival. It was the first time judges could not choose a clear winner for the award.

“They are both such deserving winners and deserve a trophy in their own right. Beverley Folk Festival has grown to be the biggest and best-known musical festival of the region and has an international reputation. It attracts thousands of visitors across its three days, helping to promote tourism to the area and enhancing the economy.”

“Everyone on the festival team is delighted at winning this prestigious award (Remarkable Tourism Event 2014). It is an award that should be shared by all the staff that work so hard throughout the year, our volunteers and supporters and all the wonderful artists who give their best for us over the festival weekend.”

“It is truly a team effort and we are proud that this has been recognized in such a way, especially as we were up against some really stiff competition from some other great events. Thanks to Visit Hull and East Yorkshire for having such faith in us.”

With the festival now only just over 12 weeks away, all those involved in it are working hard to make this year’s event ( 20 – 22 June) the best yet. With headliners such as Billy Bragg, Chas and Dave, and Michael Morpurgo, on the bill, it looks set to be a weekend of great entertainment.