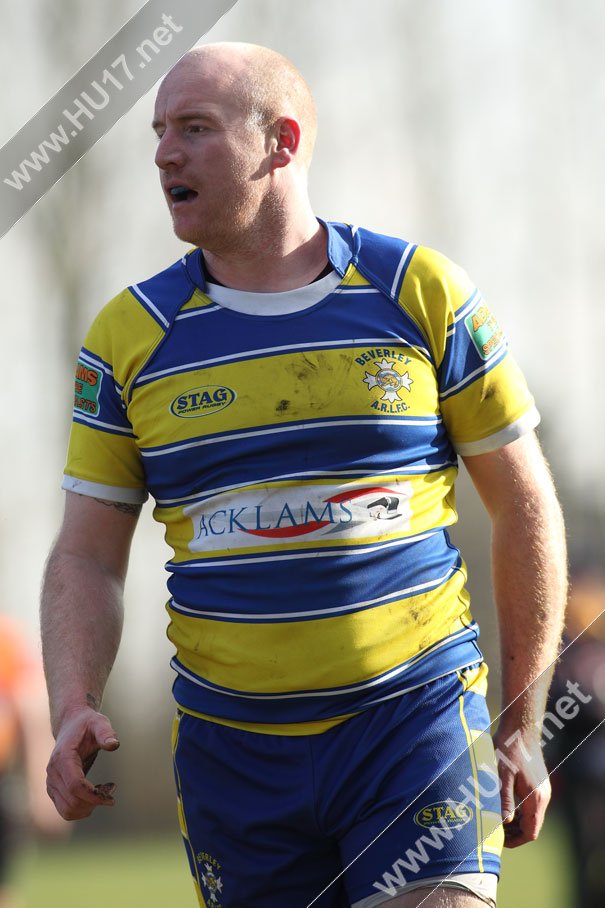 Mike Cooper returned from a three-week absence to score the winning try for Beverley ARLC in the dying seconds of a ding-dong affair at the Beverley Leisure Centre. These two very well matched sides fought out an exciting match which saw the lead change hands four times but finally in Beverley’s favour.

The blue and golds saw Will Mail, Mike Cooper, Ian lane and Jake Hart-Fisher all return but with Louis Hubbard, Rich Etherington, Gavin Platt, Phil Hill and Tom Moore all still absent they were still somewhat depleted. This necessitated drafting in Lee Atkinson, Mark Saunders and Ian Pollard onto the bench.

The visitors had the better of the opening exchanges of the match looking the more dangerous in attack. One such attacking movement saw them kept out from scoring in the corner with a desperate last ditch tackle from Jake Hart-Fisher. The hosts settled down to the task in hand, and Will Mail got over the line but was unlucky to be pulled back for a forward pass. Persistence did pay off in attack for the home side and after a determined run from Mark Saunders, the position was set up for Beverley’s opening score. Quick hands saw Steve Connolly send Jake Hart-Fisher over in the corner for the opening score. Watkin added the touchline conversion. Five minutes later Gavin Proctor was on hand to increase Beverley’s lead from the usual dummy half position a meter out from the line but too wide out to be improved from Watkin.

The hosts then became guilty of giving away silly penalties for interference at the play the ball and allowed the visitors a way back in. They managed two unconverted tries to reduce Beverley’s lead to 10-8 at the break.

The visitors with the momentum in their favour took the lead with another unconverted try just two minutes into the half. Beverley did look to hit back when a jinking run from Nathan Hoggard required a desperate cover tackle to keep him out. However, the visitors increased their lead shortly after with a try which was this time converted.

This was the signal for the blue and golds to open up in attack, and Lee Falcus sent Hoggard away on another long run to only see him pulled up 10 meters short. The ball was shifted to the right, and Ryan Watkin did well to take on the Lambwath defence to score and add the extras himself. Shortly after better handling to the left sent Mike Cooper over wide out for Watkin again to convert and restore Beverley’s lead midway through the second half. The match became attritional with both sets of forwards going toe to toe. Lee Stevens, Joe Wileman and substitute Ian Pollard all got through a tremendous amount of work.

Full back Steve Connolly always looked dangerous when joining the line in attack, and this was additional to diffusing the visitor’s aerial bombardment on numerous occasions. It seemed the visitors would have the last word when they took the lead with a converted score just ten minutes from time. But Beverley still had the stomach for the fight. Lee Stevens went so close to scoring the winner as the ball slipped from his grasp as he got over the opposition line. This signaled more raids on the visiting line which demanded some desperate scrambling defence.

But finally a long way into stoppage time Ryan Watkin broke away from deep inside his own half and looked to score the winner all but for a superb late cover tackle. However, a quick play the ball saw the ball shipped out for Mike Cooper to score his second wide out with the very last move the match. Man of the match was Steve Connolly with the ever strong running Jake Hart-Fisher and Ben Calvert a very close second and third in the
committee votes.