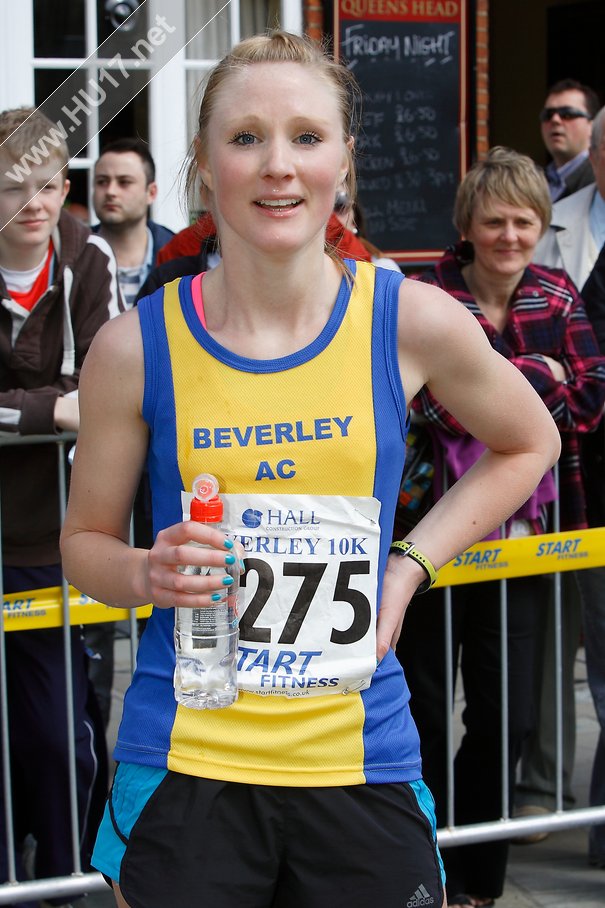 This was the third race in the 2013/2014 series, at Langdale End, on the North York Moors near Scarborough. The race is organised by Scarborough AC. Run over five and a half miles, this tough race begins by following a very muddy streamside track, before crossing a stream and climbing steeply to its highest point. This is followed by a gradual descent, and a final steeply downhill run to the finish line. In contrast to the icy conditions experienced at last year’s race, this year the weather was warm, although the course was still very wet. 22 Beverley AC athletes completed the race, which included a total field of 131 runners.

Beverley’s Carla Stansfield convincingly won her third series race in a row in a time of 41:40, over 4 minutes ahead of second place Hester Butterworth of Scarborough AC. Stansfield was 13th place overall in the race. She led the Beverley AC women’s team of three to second place overall in the team race, improving greatly on their fifth place at the previous race at Drewton Woods. The other two counters were Emma Greensmith and Sam Allen who finished in 50:36 and 53:05 respectively, and were 10th and 14th female runners to cross the line.

Also of Beverley AC, Aubrey Morrell won the men’s race in 39:21, beating Bobby Scarborough (Scarborough AC) by around 20 seconds. The men’s team of six came third out of the eight clubs represented at the race. Second for Beverley, and in ninth place overall, was Lewis Holloway in 41:04. He was joined by Luke Davison (44:00), Phillip Reese (44:03), Darren Edge (44:06) and Mark Dalton (45:32). Scarborough AC won both the men’s and women’s team events at Langdale End.

The fourth race in the six-race series will be at Sledmere, on Sunday 12th January.