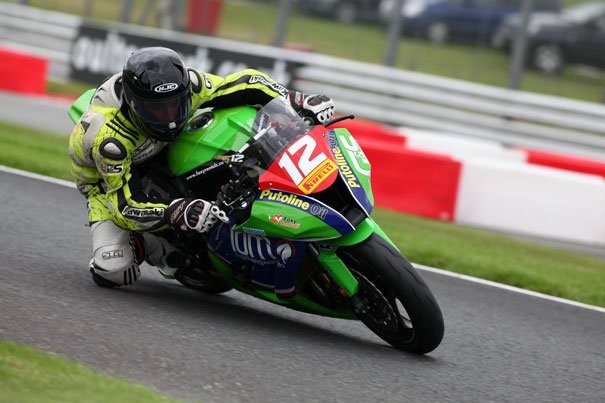 G&S Racing Kawasaki endured a torrid weekend at Oulton Park where the three riders were contesting the National Superstock 1000 and 600 championship races.

Beverley’s Dominic Usher qualified for a ninth row start to the Superstock 1000 race and got away to a good start. However, his progress was short lived when an out of control rider crashed into him putting him out of the race on the very first lap.

Usher was lucky not to crash as the offending bike ripped the exhaust and the seat unit from his Kawasaki. He wrestled the bike off the track and into the gravel trap before returning to the pits to retire.

In the same race, new signing Dan Hegarty from Nottingham took part in the last chance qualifying race where he finished in a strong fourth place to qualify one row back from his team mate and began his campaign from the 10th row.

Despite it being his first time on the bike and his first race this year in the Superstock 1000 championship he brought the G&S Racing Kawasaki home in a creditable 26th place from 40 starters.

Meanwhile in the last race of the day Tom Fisher struggled to maintain his race pace and, after starting from a third-row grid position, dropped back to 15th on the opening lap and continued to lose places throughout the 12 laps to cross the finish line in 18th place, well outside a point scoring position.

Despite scoring nil points Tom hangs on to his 10th place in the rider standings on 45 points but the riders below him have closed in and he will have to secure a good result from the next round to maintain his position.

“I am gutted not to have been able to complete my race today.”

“I had made-up several places and in a good position to make a move further forward when I was hit from behind by another rider.”

“I managed to get the bike stopped without crashing but the damage to the exhaust, and the seat unit was too great to allow me to continue.”

The next round is on home tarmac at Cadwell Park in Lincolnshire over the Bank Holiday weekend of August 24-26 when all three riders are aiming their sights at some top results and to bring back some points to the team.