Well that’s it then. This victory and defeat for their two closest rivals as good as ensures that Beverley will now be champions of North One East. Strictly it is not over till the fat lady sings but only the most bizarre of results in the remaining four fixtures can now deny Beverley. And they did it today in some style. The bitterly cold wet conditions were awful but Beverley made light of it and some of their handling and running was outstanding. Indeed both sides contributed to what surprisingly turned out to be an enjoyable encounter. Northern showed plenty of endeavour and in the end might have felt that a forty nine point defeat was a bit harsh.

Northern started briskly and were helped by an early yellow card for Richard Bussey who looked a bit unlucky to be sinbinned when he jumped for a high kick and took his opposing player out in the process. After ten minutes Northern had an opportunity to take the lead but their penalty attempt at goal led instead to Beverley going fourteen points up. The kick went wide, Beverley ran the ball back, and Lee Birch raced over from thirty metres. Northern’s restart kick then failed to make ten metres and from the resulting scrum James Holland burst away to send Sam Atiola in for a second try.

Donal Collins clawed back three points with a penalty for Northern but Beverley by then were starting to look in rampant mood with ball in hand. Nathan Sharpe was yellow carded for fighting – just like old times – which again reduced Beverley to fourteen men but again it did not prevent them adding to their score. From a scrum on the right Rob Smith sent Birch racing down the narrow side and under the posts. With Phil Duboulay converting all three tries Beverley turned round 21-3 up at the break.

Three minutes into the second half Bussey took an inside pass on the burst near the visitors line and crossed for a fourth try to secure a bonus point. Sharpe had a fine game at number eight and he touched down for a fifth when the Beverley pack drove over from a scrum. Sharpe was soon at it again with a rampant run down the middle leading to Tomasi Tanumi going over for a sixth, although it required some deft touches by the centre to wriggle through the Northern defence.

Some ill-judged kicking from scrum half several times put Beverley in peril and eventually they paid the price when another lofted kick failed to go anywhere and Northern capitalised by scoring a try, touched down in the corner by full back Barry Wade.

Bussey at the other end was unlucky when he just failed to ground the ball in the wet conditions after a lively run and chase down the right, but he did not have long to wait for his second try which came from a slick handling move that put him in at the corner. With forty three points already on the board Beverley needed one more score to take them over the one thousand points mark for the season. When it came it was in fine fashion. A clever well judged crossfield kick by Junior Tupai to Birch, who was waiting in acres of space on the opposite touchline, gave the winger an easy run-in for his third try to bring up the landmark score.

With the last action of the match, by which time many of the spectators had drifted into the clubhouse in search of some warmth, Tupai cut through for a final try. Duboulay slotted his sixth conversion and that was that. The wet windy conditions and cold hands made this a difficult day for running rugby but from the quality of play you would hardly have thought so. Northern played their part in no small measure, particularly up front, but once Beverley started to cut loose they were never really in with a chance. 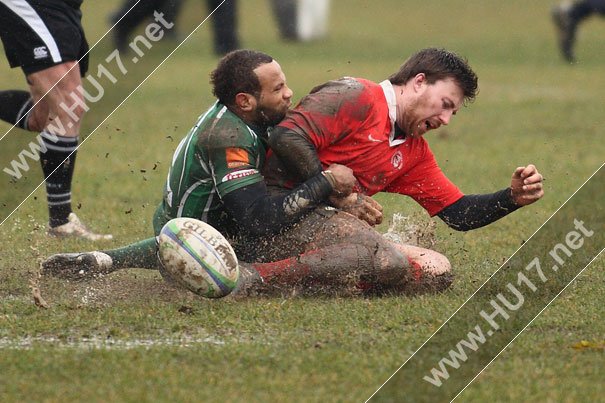