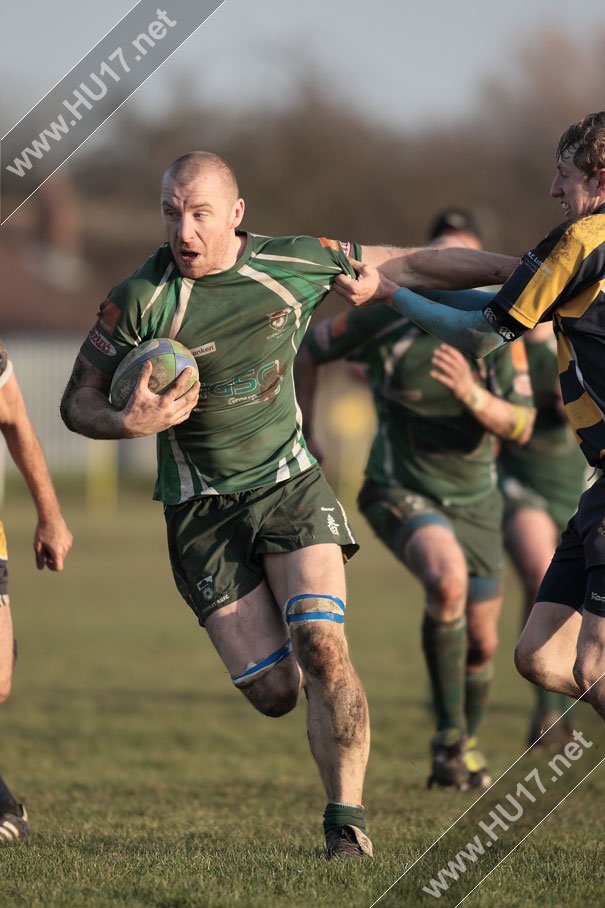 Normal service resumed. After last week’s blip at Cleckheaton Beverley RUFC got back to form in fine style and recorded an emphatic win to go thirteen points clear at the top. It was tough on Durham.

Not only were they forced to field a fairly scratch side but they were up against a Beverley RUFC team which was nearly back to full strength and smarting from an unexpected defeat the previous week. Probably no side in the league would have lived with Beverley RUFC today. They played some breathtaking rugby and most of their tries were out of the top drawer.

Despite their heavy defeat Durham deserved great credit. They never stopped trying to play, did not flinch in the tackle, and stuck it out bravely where most sides would have crumbled under the avalanche of scoring.

Beverley RUFC were quickly into their stride. Two tap penalties by Chris Infield brought tries for Joe Picketts and Richard Bussey in the first ten minutes to put Beverley RUFC on their way.

A second try for Bussey and one from Phil Duboulay quickly followed and by the end of the first quarter Beverley RUFC had already secured a four try bonus point. Duboulay’s kicking was exemplary throughout and he went on to convert thirteen of the sixteen tries scored. His personal tally overall was thirty one points.

A nice break by Junior Tupai set up a try for Infield and within two minutes Tupai added another himself. Tomasi Tanumi weaved his way through for a spectacular try on the stroke of halftime taking Beverley RUFC to 38-0 at the interval.

After the break Beverley RUFC could afford to play with even greater abandon. They ran the ball from anywhere and one try followed another. Within a quarter of an hour they had added three more tries by James Holland, Tanumi and Gavin Gibson. Although heavily outplayed Durham never stopped having a go. Kyle Wilson and Alex Whitfield gave it everything up front. They deservedly got some reward when their pack forced its way over and second row Dan Gandhilon touched down for a consolation try.

But that was as far as they got. David Worrall, Bussey, Nathan Clarke (2), Alex Ogilvie, and Francis Pickering all added further tries for Beverley RUFC eventually taking them past the hundred point mark. It was the first time in living memory that Beverley RUFC had achieved this.

Beverley RUFC’s backs throughout were lightning quick and slick with their handling – nothing unusual there – but it was the encouraging forward play that perhaps gave the most satisfaction. Worrall had a tremendous match repeatedly breaking through and rampaging about the pitch, covering an enormous amount of ground in the process.

Worrall, Picketts and Holland are, and looked, as effective a back row as any in the league. Young Stuart Nel is adapting well to this level of rugby, and props Alex Ogilvie and Francis Pickering were never far from the action. Ogilvie’s try under the posts, which rounded off some fine support play, brought the biggest cheer of the day.

When Beverley RUFC rang the changes in the pack Martin Shaw ran powerfully as did Clarke who scored two tries. After a disappointing day at Cleckheaton Kris Renwick was back on track with his throwing at the lineouts which generally functioned much better this week.

All in all it was a satisfactory day for Beverley RUFC. Runaway scores like this can often make for tedium but the sheer quality of some of the Beverley RUFC play made it an absorbing game to watch right to the end. As indeed did the contribution made by Durham. It was a hugely commendable effort by them given the onesidedness of the contest. Durham are a fine old club presently going through a sticky period.

It will be sad to see them slide out of the league. Beverley RUFC’s fixture next week against third placed Morley will be an altogether different affair. In the game at Scratcherd Lane earlier in the season Beverley RUFC carelessly threw victory away and they will be anxious to settle the score.