Some good rugby but overall a rather strange game. The outcome was settled in a devastating quarter of an hour spell at the end of the first half during which Beverley RUFC ran in five unanswered tries.

At no time did Beverley RUFC ever look in danger of losing this contest but up till then Middlesbrough had given them plenty to think about. Had they not twice opted for scrums instead of taking simple penalty kicks at goal Middlesbrough would probably have been six points up within the first five minutes.

In the end it was all pretty comfortable for Beverley RUFC. Oddly enough for the second time in three games they finished 49-5, all their points again coming from seven converted tries.

Beverley RUFC kicked off in bright winter sunshine into a bitter north wind and soon found themselves on the back foot. The big Middlesbrough pack showed plenty of early determination and kept up a steady pressure on the home line without managing to come away with anything.

For their part Beverley RUFC with the ball in their hands always looked menacing but somehow Middlesbrough kept them at bay until a quarter of an hour before halftime. Middlesbrough had tackled well but they were constantly living on the edge with offside and eventually flanker Richard Lonsdale was yellow carded for constant infringing.

Suddenly Beverley RUFC did cut loose. Jon Stephenson powered his way over after the pack drove forward from a penalty scrum ten metres out and the floodgates immediately opened. Two minutes later Alex Ogilvie added another and then Lee Birch glided over from forty metres out for a third. A wonderful sweeping move from their own line brought a fourth by David Worrall and Phil Duboulay with a lovely dummy cut clean through for a fifth.

35-0 down at halftime it was all over for Middlesbrough who might have felt hard done by after their determined early efforts. But for them worse was to follow. The second half was only three minutes old when Beverley RUFC added a sixth try. Richard Bussey coming off the bench at the break made an immediate impact with a scything run through the middle to set up a try for Tomasi Tanumi.

It was then surely just a question of how many more points Beverley RUFC were going to run up. Well not quite, actually. For all their supremacy it took Beverley RUFC another half an hour to add to their score. Middlesbrough responded bravely and never stopped trying to attack. Their fly half Jack Bircham constantly probed and Rhys Kilbride on the wing might have been a real threat had he seen more of the ball. Several times Middlesbrough camped on the home line but they lacked the killer thrust to overcome a solid home defence. Beverley RUFC’s final try when it did come was the best of the day.

It followed an attack down the right involving smart interplay between backs and forwards. When the ball was moved across field Nathan Sharpe produced a turn of speed we have not seen for a long time and raced in from thirty metres to touch down.

With five minutes remaining Middlesbrough did get some reward when their pack drove over from a penalty lineout. It was no less then they deserved. Theirs had been a brave effort but like most of Beverley RUFC’s opponents this season they found themselves up against a firepower and support play they could not match. None the less they did well to restrict Beverley RUFC to only two tries in the second half.

It was a good day for Beverley RUFC not least for the return of Gavin Gibson, Stephenson and Bussey after long lay-offs with injury. All three had good games as did the side as a whole which showed no weak link in any department. Duboulay was successful with all his six conversions, Junior Tupai adding the seventh. Results elsewhere mean Beverley RUFC have now increased their lead in North One East to fourteen points with nine games to play. 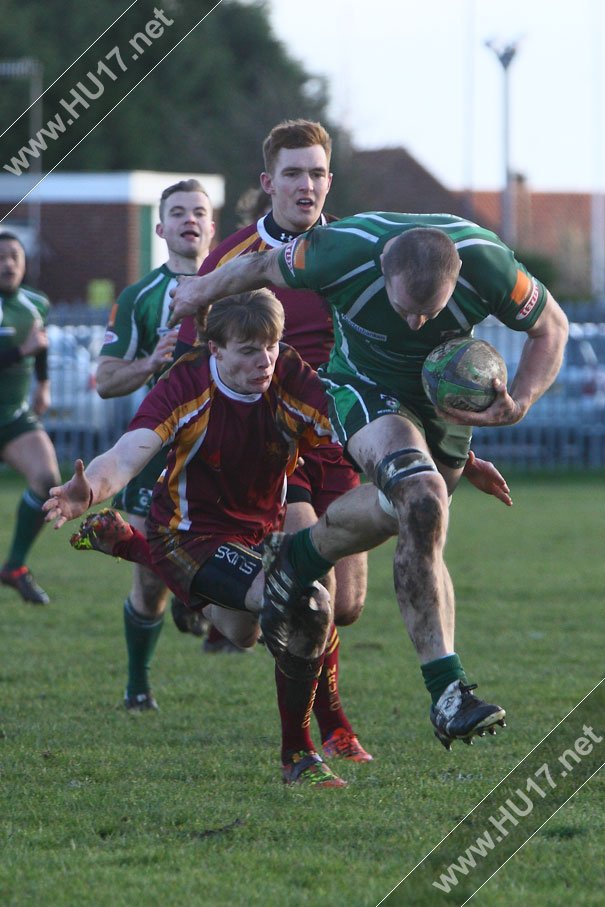