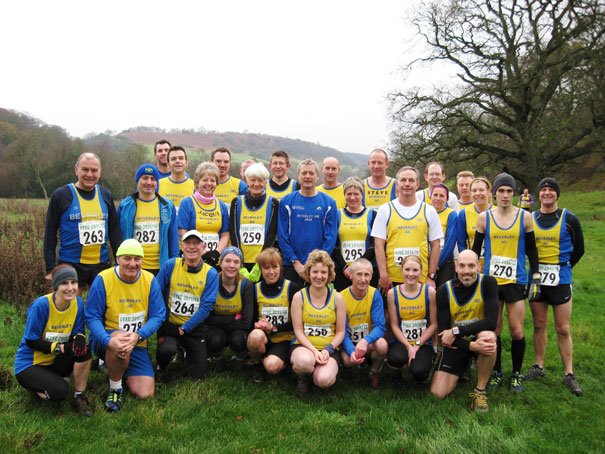 Host club Scarborough AC have varied the course over the years but no matter which route is chosen it is always the most demanding race in the league. The tricky terrain includes very steep inclines, river crossings, fields and woodland. The weather provides an additional challenge and rain in the days leading up to the race this year created very muddy conditions and made the hills very slippery. On the exposed parts of the course there were lots of icy puddles and runners also had to battle against heavy rain and strong winds.

Stuart Carmichael of City of Hull won the race comfortably in 36:37, followed by James Kraft of Scarborough in 37:40. James Pearson of Beverley finished third in 38:34.

In the battle for points it was City of Hull who came out on top, 13 points ahead of Beverley who beat Scarborough into third place by only 3 points.

Beverley’s Carla Stansfield finished first in the ladies’ competition. In only her third race for the club she is proving to be a very valuable asset. She put in a very strong performance to complete the course in 42:37 and in 16th place overall.

“The cross-country that I’ve done before has always been shorter than this league,” she said afterwards “but I enjoyed the course a lot more on Sunday because I paced myself better.” She finished 21 seconds ahead of Scarborough’s Katy Rawnsley, a formidable opponent, who was making her first appearance this season after a very successful cross-country series last year.

Sam Allen and Julie Donald scored additional points for Beverley finishing in ninth and tenth places respectively in the ladies’ competition. Allen was four minutes faster than last year and Donald did particularly well considering she ran the Lisbon Marathon the previous Sunday.
Beverley ladies finished second at Langdale End, nine points behind Scarborough and one point ahead of City of Hull.

It was a tough introduction to cross-country running for new members Gareth Jackson and Steve Parkinson in their first race for Beverley. “After running through the stream I was totally unaware of the climbs that came next, “ commented Parkinson, “it was a total shock to my lungs and cardio system!”

Nevertheless he was delighted with his finishing time and is already looking forward to the next race.

At the halfway point in the series and with another 3 races to go, competition is fierce and only a few points separate the top clubs in the league. City of Hull lead both the men’s and ladies’ competitions.

Beverley’s men are in second place, 33 points behind City of Hull and 234 points ahead of third placed Scarborough. It looks like it will be a two-horse race for the trophy and if Beverley can field its strongest men’s team they will be able to mount a serious challenge to City of Hull.

Beverley ladies also lie in second place overall in the league, 26 points behind City of Hull and 22 points ahead of Bridlington. Scarborough and Driffield are not far behind so this competition is still wide open.

There were 138 finishers at Langdale End and the race was won by Stuart Carmichael of City of Hull in 36:37. The first lady to finish was Carla Stansfield of Beverley Athletic Club in 42:37. Beverley Athletic Club fielded the largest team and the club was particularly well represented in the ladies’ competition.

The next race in the league will be held at Thixendale on 15 January 2012.