Beverley 1st XI moved up to second place in the York Premier Division with a narrow two-wicket win at Sessay.

The 2nd XI got the best of a draw in a high scoring encounter with bottom-placed Pocklington while the 3rd XI crushed North Ferriby by the massive margin of 123 runs The 4th XI lost at Norwood in a close game but retain their place in Alliance Division One for another season.

There were two outstanding individual batting performances by Tim Smith (136) and Paul Best (133) as they registered the second and third highest of the nine centuries scored by Beverley batsmen this season.

Beverley Town made the long trip to Sessay in an attempt to stretch their three match winning streak. On a damp and cloudy day Alan Acklam once again won the toss, a factor which is proving so crucial to the results, and gave Sessay to have first use of the track. As usual Simon Roe and Matthew Mudd were able to keep things tight despite bowling at two of the more prolific and aggressive batsmen in the league. The augmented this with the steady removal of the top order. Mudd, in particular, bowled with pace and aggression and was able to take three quick wickets. As the overs ticked by Roe was able to join in on the act and claim three wickets of his own to leave Sessay in trouble. However, as so often is the case a middle order partnership brought them back round and Sessay were able to build their score into the final overs reaching 177 for 7. Roe took 3 for 54 and Mudd 3 for 51 and change bowlers Brad Dobson and Matt Smith also bowled extremely well, Smith taking his maiden 1st team wicket.

The reply was delayed, following a sublime tea, due to light drizzle and once underway Beverley were immediately in trouble losing three quick wickets. However, Anthony Spence held firm and totalled 31 before also falling. If Beverley were going to win game the middle and late order needed to produce the goods as in past weeks. Grantham was the lynch pin and with Jonny Vodden scoring a quick 36 followed by an equally paced 35 from skipper Acklam saw Beverley firmly in control. A hat-trick from Sessay’s pace man saw Beverley in a mild panic, and wobbling at 158 for 8, but with Grantham holding strong nudging the singles, Mudd came in and cracked 13 not out, and the remaining 20 runs were scored to claim victory. Grantham remained not out on 42.

Once again Beverley performed well under pressure and have forged a habit of winning despite the game position they are in, something that has eluded them over many years. They now occupy second place in the league behind champions Woodhouse Grange and with just one game at home to Clifton Alliance left on Saturday hope to secure the runners up berth.

There was a run feast at Norwood last Saturday when the 2nds entertained relegation threatened Pocklington. Home skipper Tim Smith led the way for his side with a superb 136, his opening stand with Ben Fish worth 147 runs. Smith has now reached 700 2nd XI runs for the season, comfortably the highest league aggregate in the club, and Fish, who made 55, has eased past the 500 mark for the 2nd XI this season. Smith hit nineteen fours and a six in his innings as he continued in another century partnership, for the second wicket, in the company of Iain Gillyon who made 47. Tim Fordon continued the run spree to hit 18 not out as Town closed on a massive 294 for 5 from 45 overs.

Pocklington did not appear daunted by their target and, despite losing two early wickets to Nic Robinson, moved to 156 for 3 before a run out by Pete Hynes and two wickets for Jamie Roe (2-55) halted their progress. A seventh wicket fell to Steve Blake (2-72) at 166 before a rapid partnership of 79 was only halted by the return of Guy Brumfield who then claimed his second wicket, and five tight overs from the experienced Iain Gillyon which forced Pocklington to settle for the draw. Brumfield bowled well for his 2 for 43 from ten overs and Gillyon’s brief but invaluable spell cost only fifteen runs as Town at last got on top at the end of the innings. The visitors closed on 262 for 9 giving them 12 points in their fight against relegation and Town 27 points as they lay fifth in Division 2 just nine points from third place.

North Ferriby 145 all out

Beverley 3rds played North Ferriby in their final away game of the season and came away with an emphatic win keeping hopes of a third place finish alive. Town were asked to bat first and started positively with openers Rich Moon (18) and James Broekhuizen (27) who played some lovely shots. Paul Best was unlucky to find himself back in the 3rds for this game but he responded in the best possible manner. Best scored a superb 133, including fourteen fours and five sixes, from only 102 balls playing shots all around the ground. He was only out when trying to hit a fourth maximum off the fourth ball of the final over. Alex Nightingale scored a second successive half century, ending 58 not out, whilst adding 178 with Best for the fourth wicket. Beverley closed on 268 for 4.

Town got off to the best possible start reducing Ferriby to 13 for 4 and then 36 for 5, Tom Haytack and skipper Kieran O’Brian causing the early carnage. Under 13 player Greg Whyley was introduced shortly afterwards and, after a nervous start, he found his length and picked up two wickets for 32 runs from his ten overs in another promising spell. James Emery bowled tightly whilst never looking like taking a wicket and with 15 overs to go the town skipper wanted a quick end to game. He delivered himself with two wickets in his first over back reducing the home side to 117 for 9. O’Brian finished with 4-35 which should have been a “five-for” if Paul Fleming had caught a “dolly” at first slip. Tom Haytack soon wrapped up the game ending with figures of 4 for 19 in 6.2 overs as North Ferriby were bowled out for 145. Beverley sit in fourth place in the Alliance Premier Division knowing a victory against league champions Patrington this Saturday is needed in their quest for third position.

Beverley 4ths poor run of results continued as they slumped to another defeat at Norwood to North Ferriby 2nds . After losing the toss and being asked to bat first Beverley hoped to post a big score but found themselves 18 for 5 as the top order again failed. Only Sam Horton (13) made double figures and it was left to the experienced Ray Teal to bat a long patient innings with help from Sam Welburn and Matt Novis (16) as Beverley posted 110 all out in the final over. Teal was last man out for an excellent 59.

The 4ths needed a positive start and another good opening spell from Ian Goforth (2-17) and James Grainger (0-14) put Beverley in with a chance of victory. Welburn took two quick wickets and Horton one with his first ball to leave the visitors on 38 for 5 and the 4ths looked like pulling off a remarkable turnaround. Unfortunately for Town some big hitting from Duncan and then Hodgson took the game away from the 4ths despite further wickets from Horton and Novis. Ferriby passed Beverley’s total to win on 111 for 7. Results in the other games mean the 4ths will remain in the strong Division 1 next season which help the development of the club. 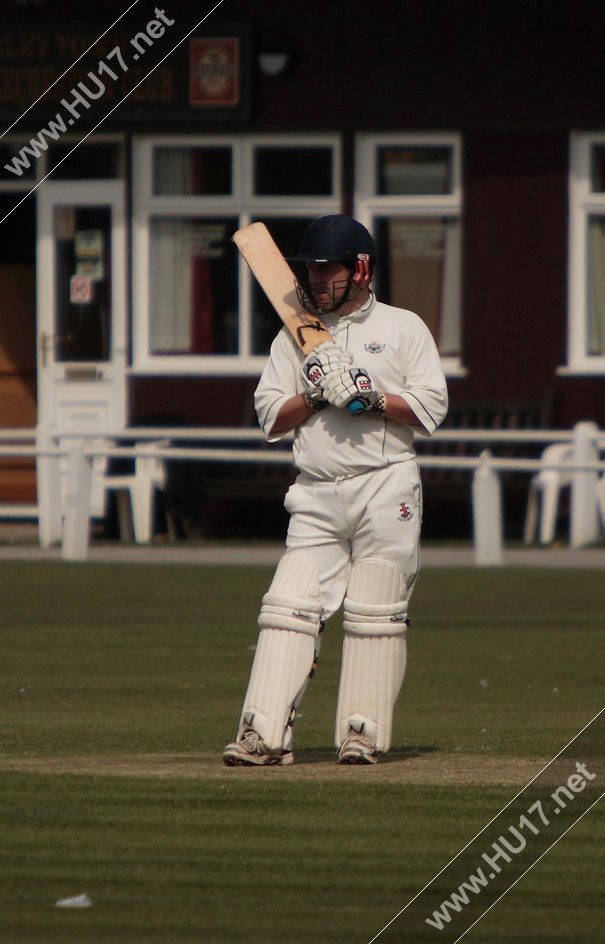