Beverley RUFC slipped to their fourth defeat in a row loosing out to Morley RFC 9 points to 6. Beverley had a late chance to level the scores though the penalty kick feel short of the posts. Beverley RUFC was once again hit with more injuries worries with Ian Archibald leaving the field of play of play in the second half with a suspected broken arm.

Match report: A slippery ball and solid defending by both sides produced a close game that could have gone either way.  Increasingly it looked likely that one try would be enough to win it for either side.  Morley had the better of the first half and should have been well clear by the break but Beverley came back strongly in the second and went close to snatching victory at the death.  Had Beverley played the whole match as they did the last ten minutes the final result might well have been different.  Poor handling and use of the ball was again their main bugbear.

Morley had the better of the early play although they struggled all afternoon to get any change out of the lighter Beverley pack who frequently pushed them back in the set pieces.  While Beverley had the edge up front Morley kicked and ran the ball far better in the backs.  After their fine flowing rugby of the opening games of the season Beverley at present seem to have lost their way outside the scrum where the ball hardly ever got beyond the inside centre.  In Goran Jelencic they have one of the most dangerous wings in the league but once again he never got a worthwhile pass.  Attacking with a flat line meant Beverley’s options were largely restricted to crash balls through the centre which never got them anywhere and never looked likely to.  Jade Gardiner and Richard Bussey did make a few promising surges but invariably the ball was lost in the tackle or thrown anywhere.

Morley took the lead after quarter of an hour with a penalty from Simon Bradshaw when Beverley were offside on their 22 but they were unable to add to this despite plenty of good possession.  Beverley kept them at bay with some resolute defending and on the stroke of halftime Ian Archibald with a 45 metre penalty brought Beverley level.  Early in the second half he was narrowly wide with another penalty attempt before having to leave the field with a suspected broken arm – Beverley’s fifth break in eight games.

With substitutes Mike Kilgannon putting in some crucial tackles on the wing and Craig Hancock bringing a bit more urgency to their lineout Beverley steadily began to get the upper hand.  But the first of two careless penalties again cost them dear.  Instead of clearing their lines they tried to run the ball out of a scrum in front of their own posts, were promptly penalised for crossing, and Bradshaw with a simple kick put Morley ahead again.

In the wet conditions neither side could conjure up enough penetration to look particularly dangerous, although Bradshaw was unlucky to be offside when cleverly taking a long crosskick and cutting in for what would have been a fine score under the posts.  But mainly the second half belonged to Beverley who deservedly drew level with a penalty from Kilgannon.  Martin Shaw was having a splendid game in the loose and Phil Dale did well when he moved to scrum half.  Unfortunately for Beverley within five minutes all their hard work was undone when they conceded another careless penalty for holding on in the tackle in front of their own posts.  Bradshaw made no mistake and Morley were again back in the lead.

With ten minutes left Beverley went hell for leather for the try that could win them the game.  They at last started to move the ball quickly through the hands and there was a snap about their back play which had been missing all afternoon.  Sadly for them it was too late.  A Kilgannon penalty attempt from near halfway in the last minute proved just too much against the stiff wind and Beverley ended the day with a disappointing defeat while Morley rounded off a seventh consecutive victory to consolidate their position at the top of the table. 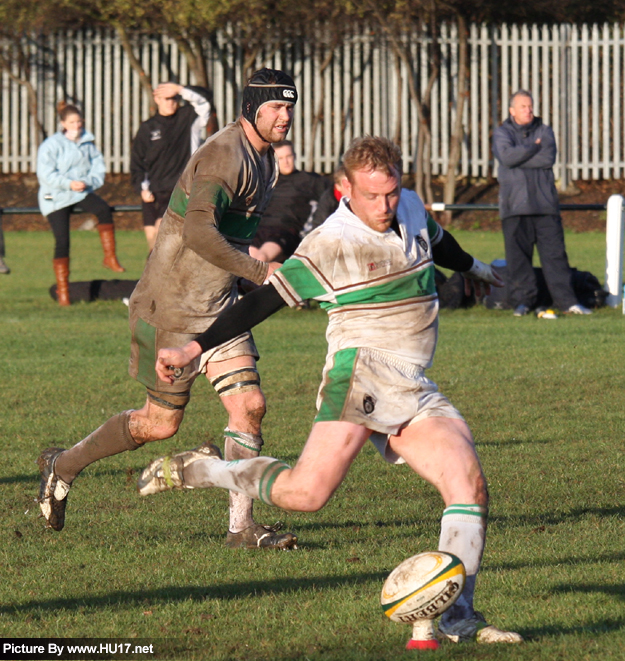 Click on the thumbnail to enlarge the image, these are just some of the pictures please contact us
if you would like a copy of your photo by sending an email to paul@hu17.net

Click on the thumbnail to enlarge the image, these are just some of the pictures please contact us
if you would like a copy of your photo by sending an email to paul@hu17.net