Strong results for Beverley based sidecar racers of Sam and Adam Christie elevating them to 2nd place in the British Championship.

Knockhill in Scotland was the venue for Round 3 of the British Championship with 2 18 lap races on the same day.

After Qualifying in 5th position, Team Christie spent the majority of the race in 4th position trying to close down the 3rd place team of Stevens/Allum.

Sam and Adam set their fastest lap on lap 17 but it wasn’t quite enough and finished in 4th position. Race 2 was very similar to race 1 with Team Christie finishing in 5th position and leaving Knockhill with 3rd position in the championship.

Donington Park was next up in the first week of October, a circuit with very little experience for the team. The third of the Christie Brothers – Tom was also in action at Donington Park with experienced driver Ben Holland. 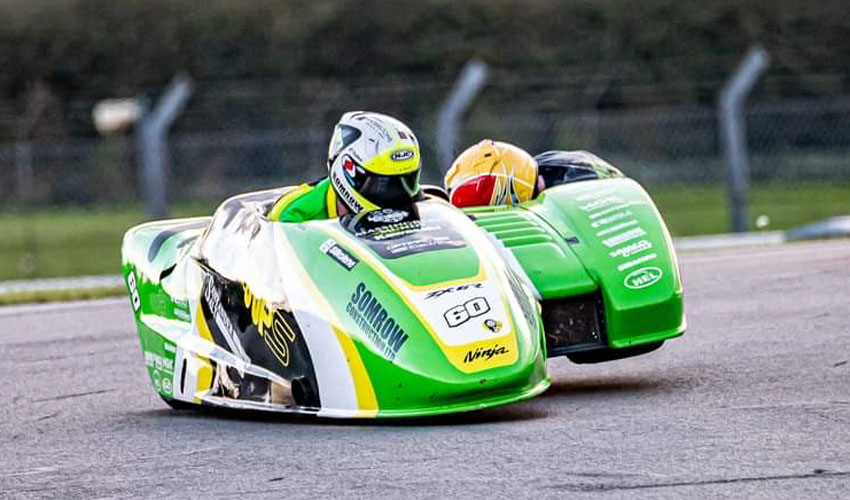 2nd in Free Practice in dry conditions was a great start to the weekend but wet weather hit the circuit for Qualifying and struggling with setup, Sam and Adam qualified 10th.

Race 1 was also held in wet conditions and with changes made to the setup, Team Christie finished 7th with a much-improved feel to the machine while brother Tom finished in 3rd position in the tricky conditions, a great result for the pairing.

The sun came out for the final race of the weekend on Sunday and Team Christie moved into 2nd position at the end of lap 2 and held it until lap 10 finishing 7 seconds behind the leader. Ben and Tom had a great long race battle and crossed the line to finish in 9th position.

A great end to the weekend for Sam and Adam with a podium finish and moving into 2nd position in the British Championship with one round remaining at Brands Hatch over 16-18 October.