Mr Parish was one of the campaigners who took to the streets to voice their concerns over the Post Office plans to relocate services to WH Smith store on Toll Gavel.

Speaking about why he felt Beverley should retain the Crown Branch he said;

“The Post Office has been in Beverley since 1905. They are downgrading the Post Office network. Over a number of years, it has been withering on the vine. This is something all political parties have had their dabs on.”

“As a result of which we believe Beverley a town of this size with an expanding population and boundaries deserves a Crown Post Office. You have staff in there who have a combined total of 100 years service.” 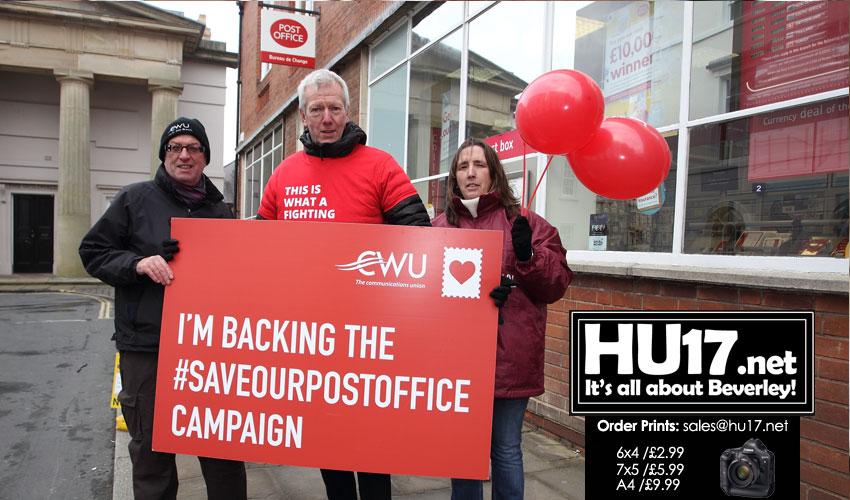 Mr Parish says the £30M funding that is being used to pay for the franchising of the service should be invested into the current facilities.

While the Post Office says the move will offer extended opening hours and a better environment for customers in Beverley Mr Parish remains unhappy. He said;

“Rather than using the taxpayer’s money to facilitate this move, why not invest that money in the current Post Office network.”

“This office in Beverley has been requesting new technology since 2012, all of sudden we are in a consultation process and WH Smith will be getting it. That can’t be right.”

“ Let’s have that new technology now. So they can issue driving licences something we will probably need with Brexit.”

“We want this office to stay open and expand as Beverley expands embracing new technology and new services.”

“Once you take a Crown Post Office out of the high street you tend to find it has a negative effect on the neighbouring retailers.”

“Fingers crossed a show of strength by residents all political parties and trade unisons we will fight this to the very death.”

George McManus a member of the local Labour Party said;

“Following the fantastic turnout in support of the Communication Workers Union’s campaign to save Beverley Post Office we will be lobbying the Secretary of State for business to change policy.”

“After the government’s dramatic U-turn on Universal Credit, we are hoping they will see sense regarding the transfer of the Crown Post Offices.  It’s not too late but the whole community needs to get on board if we’re to save this valued service.”

The CWU has also arranged a Public Meeting. The meeting will take place on from 6.30PM on Thursday 24 January at Armstrongs Social Club. They say it will give the public an opportunity to voice their concerns and will also be attended by local officials.