Two pupils at St Mary’s Primary School Poppy Kitchen and Florence Hewitt have delivered a talk to fellow pupils about their involvement with the Humberside Police Lifestyle Project.

Poppy and Florence took part in the project during the summer holidays choosing to raise money to buy Friendship Benches for the school’s playground.

Following a successful effort, the pair raised enough money to pay for three Friendship Benches which have now been installed at the school.

Commenting on the efforts of the Poppy and Florence,  Acting Headteacher, Laura Wallis said; 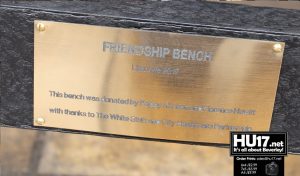 “We have three new Friendship Benches thanks to the efforts of the girls.”

Speaking about their fund raising efforts, Poppy and Florence who were team ‘BFF Squad’ said;

“We done it because we wanted to keep children happy in school as we realised happy learners are good learners. In all we raised £850 to pay for the benches.”

With one of the girls dad’s into cycling the he helped them plan  a route taking them along the back roads racking up the miles and their money they raised.

When asked if they would consider taking part this summer in the Lifestyle Project they they would be and also would recommend their friends to do the same.

PCSO Sandra Coneyworth who was at the school said;

“Lifestyle is a great way for children to spend their summer holidays bonding together while doing projects for the local community.”

“I think it is a fantastic idea to have Friendship Benches. They obviously have noticed some children are lonely and sit on their own and it is a nice way for other children to recognise they need to be part of a group.”