A well liked and respected man in Beverley, Tommy Anderson has sadly passed away at the age of 90 years old.

Tommy, who was originally from the North East of England had been living in Beverley for 60 years, during which he became a well known and a much liked member of the community.

During his time in Beverley, Tommy spent many years as bar manager at the Kings Head Hotel and also Grove Hill public house where he arranged functions for local pensioners.

He also played an active role in the community and was a member of the local Darts and Dominoes Committee and played bowls with Beverley Town Bowls Club. 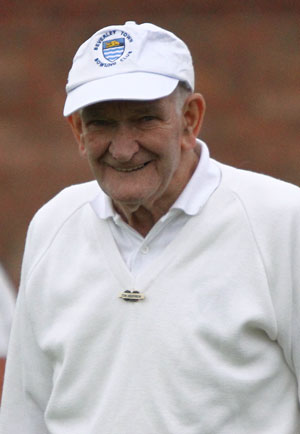 As he got older he was unable to play bowls, though was still a regular fixture at the club, or in the club house quite often surrounded by the ladies.

A man with a big smile, Tommy was always someone who had time for people. In my case I met him at the Norwood Recreation Ground and often we would talk about boxing.

In all my encounters with him Tommy was always so cheerful, he loved having a picture taken and more so liked a good chat.

Mark said his father was with his family when left this world peacefully on 28 December. While he was sad at his loss he was also happy that his father had lived full and happy life.

Tommy will be finally put to rest at a service to be held at Haltemprice Crematorium on 22 January at 11.30AM.

The family say anyone who knew Tommy and would like to say their final goodbyes is welcome to attend.

Following the service  there will be a gathering at Armstrongs Social Club where people can raise a glass and celebrate the life of one of the towns most respected people.