Proposals to site a permanent 70ft high telephone mast next to residential houses in the car park of the new Beverley Arms Hotel, are facing strong resistance from local residents.

Councillor Denis Healy has now stepped in so their voices can be heard after the controversial plans were submitted on behalf of two mobile phone operators. 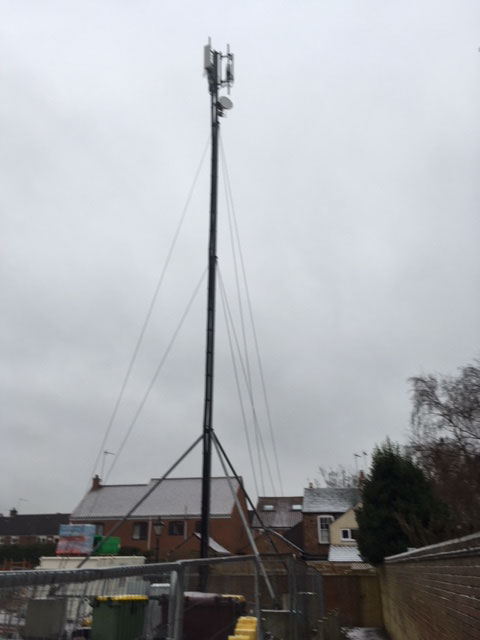 “Before the original 1960s bedroom block of the Beverley Arms was demolished a few months ago, it had various pieces of telecommunications equipment on the roof, which are essential for mobile phone coverage in Beverley.”

“That equipment was temporarily re-sited on a mast in the unused car park whilst demolition and reconstruction work took place, and the Council gave permission for this to happen under emergency planning powers.”

“Indeed, my understanding from residents is that the mobile phone operators had given an undertaking to our local MP that the equipment would be put back on the roof once the new hotel was complete.”

“However, just before Christmas, a notice appeared on a lamp post, informing residents of the planning application for a new mast, which is to be situated away from the hotel itself, at the edge of the car park and next to residents’ gardens.”

“To make matters worse, the Council has given an extremely short period of time for residents to comment, setting a deadline of 9 January, when the notice itself appeared only a few days before Christmas.”

“With the Christmas and New Year holiday falling in the middle of what was already a very sort consultation period, it almost feels as if the applicant and officers were hoping that no-one would notice, and that the deadline would pass before people had a chance to air their views.”

“I am a strong supporter of Thwaites and the new Beverley Arms Hotel development, and everybody accepts that mobile phone transmitters have to be sited somewhere, but the original intention was to re-site on the roof, and if this isn’t now possible, we should be considering other options that reduce the visual impact to our residents.”

“I want to see less haste and more consultation with this application, including giving the local people who will be affected, the opportunity to comment and come up with suggestions.”

“With this in mind I will be asking the Council to extend the neighbours’ consultation period, and I will be calling this application to the Eastern area planning committee in the interests of a full and proper debate.”

“Residents need to have their voices heard, and it’s my job as their Councillor to ensure that this happens.”