Opening on 5th October, East Riding Theatre in Beverley is producing Kiss Me by Richard Bean, writer of sell-out shows The Hypocrite at Hull Truck Theatre and international hit One Man Two Guvnors in London’s West End and on Broadway.

Kiss Me transferred from Hampstead Theatre to the West End earlier this year, but ERT’s show will be the first time the play has been produced outside of London. 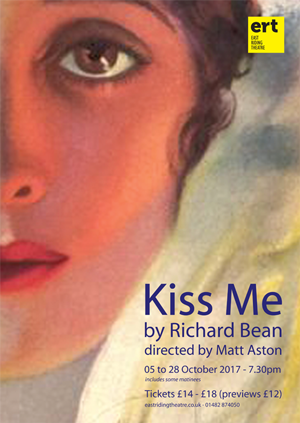 “We’re really pleased to be putting on Kiss Me at ERT. Richard has been a great supporter of the theatre since its beginning and became one of our ambassadors in 2014. Kiss Me is an intriguing and rib-tickling two hander that I think will work wonderfully in the intimate atmosphere at ERT.”

Described by the playwright as a ‘forbidden love story’ Kiss Me is set in the late 1920s and sees war widow Stephanie desperate to become a mother. With little chance of finding a husband from the few men who survived the war, she instead makes a date with Dennis who has a rather unusual profession.

In a world where everything has been turned upside down by the ravages of war is Dennis really the answer to her dream of having a baby? What follows is a tender, humorous and compelling tale with no kissing allowed!

The play will be directed by Matt Aston whose recent success Touched at Nottingham Picture Playhouse received outstanding reviews.

“I’m delighted to have been asked to direct Kiss Me, written by Richard Bean, at ERT. Richard is a playwright I’ve admired for many years, so it’s a real thrill to get the opportunity to direct the regional premiere of this fantastic two hander. The fact it’s at a venue that already has a place in my heart makes it even more special.”

Returning to ERT’s stage after her excellent ERT debut in The Night Season, earlier this year, Bettine Mackenzie takes the role of Stephanie, locally based actor Edward Cole, who worked at Shakespeare’s Globe theatre before returning to Hull, makes his ERT debut as Dennis.