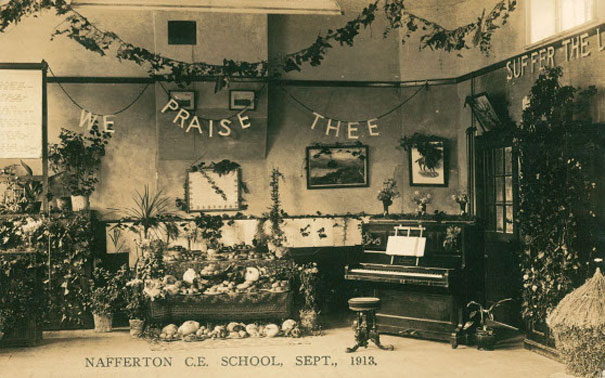 For those of us who may be uneducated in farming traditions, our only knowledge that the harvest season approaches might be the sight of more tractors on the roads, or the experience of following behind a convoy of combine harvesters.

But almost everyone will have some recollection of the traditional Harvest Festival, which takes place at this time of year.

It is held once a year in many church parishes across the country, and the Yorkshire Wolds are no exception.

The parish church is decorated with fruit and vegetables along with the traditional corn and bread, with the offerings later being distributed to hospitals or local charities; back in the old days these were the ‘food banks’ of the times.

At the East Riding Archives, a snapshot of historic documents from various collections helps to give an idea of what Harvest Festival was like.

Items dating from 1863 all the way up to 1999 include school photographs, committee minutes, and thank-you letters for donations, which all help to build a picture of this tradition in East Yorkshire over time, and it’s a tradition that is arguably less celebrated these days.

“Today the food banks play a fantastic role all year-round in giving food to those in need. Before the food banks, the harvest festival was society’s means of providing charitable food donations, so it fulfilled a practical function as well as being a spiritual celebration.”

Early harvest festivals were called ‘Lammas’, meaning ‘Loaf Mass’ and deriving from the Anglo-Saxon ‘Hlafmaesse’. After dying out as a custom it was revived again 1843 by Reverend Robert Hawker of Morwenstow, Cornwall.

The parish church at Nafferton claims to have been the first to reintroduce it to the East Riding, during the incumbency of Reverend James Davidson between 1854 and 1906.
T
o view any historic documents relating to harvest festival, visit the East Riding Archives at the Treasure House, on Champney Road, Beverley or call (01482) 392790 for more details.