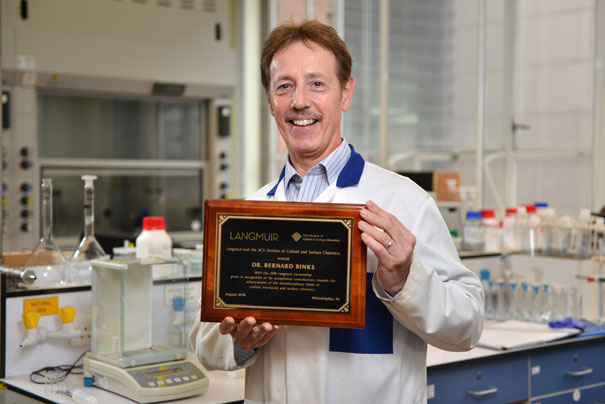 A professor from the University of Hull, who pioneered the creation of dry water, has won a prestigious award in America.

Professor Bernard Binks, who lives in Walkington, is a world-leading expert in the field of physical chemistry, has been recognised for his pioneering research by the American Chemical Society (ACS) – the US equivalent of the Royal Society of Chemistry.

In a career spanning almost 30 years, Professor Binks developed the science behind dry or powdered water, now used in cosmetics and pharmaceuticals. More recently, his research team developed the process to transform liquid oil into a powder, which is expected to have widespread industrial and commercial applications.

Now Professor Binks has been awarded the 2016 Langmuir Lectureship in recognition of his research achievements.

The Langmuir Lecture is named in honour of American chemist and physicist Irving Langmuir, who died in 1957.

Langmuir invented the gas-filled incandescent lamp, the hydrogen welding technique and was awarded the 1932 Nobel Prize in Chemistry for his work in surface chemistry. He was the first industrial chemist to become a Nobel Laureate.

Every year, the ACS invites two world-leading chemists to deliver the Langmuir Lecture at their annual meeting.

Professor Binks presented a plenary lecture at the 252nd National Meeting in Philadelphia and will now write a peer-reviewed feature article for the Langmuir Journal.

Professor Binks, who lives in Walkington, said: “It’s a huge honour to be recognised by the ACS. The National Meeting is probably the biggest chemical conference in the world. Every branch of chemistry is covered in parallel sessions.

“I already collaborate with academics in America and they are probably seen as the powerhouse in some of the chemistry we do.”

He hopes his latest award will lead to further collaborations with American academics and businesses.

Professor Binks acknowledged the PhD students and post-doctoral assistants who he has worked with over the years.

He said: “Without their work and experimental excellence, we wouldn’t have been able to achieve what we have.”

In his lecture, Professor Binks summarised the highlights of his research career and the ground-breaking research he is currently doing into the behaviour of coloured pigment particles in emulsions of oil and water.

In a further recognition of his international standing in the field of chemistry, Professor Binks has been invited on to the board of the Langmuir Journal as a Senior Editor.

Professor Stephen Kelly, Dean of the Faculty of Science and Engineering at the University of Hull, said: “It really is a tremendous achievement to win this award. Professor Binks is a world-leading expert in the field of physical chemistry and we are delighted that he has been recognised for his outstanding research over many years.”

Professor Binks graduated with a 1st class BSc degree in Chemistry from the University of Hull in 1983 followed by a PhD in 1986.

He took up his first lecturing post at the University in 1991 before being appointed Professor of Physical Chemistry in 2003.

In 2014, Professor Binks was presented with the Surfaces and Interfaces award by the Royal Society of Chemistry for his “pioneering contributions to particle-stabilised emulsions”.

Professor Binks is currently working on a two-year project with Hull-based edible oils and fats producer AAK to develop bakery products based on emulsions. In the past, he has also done a number of research projects with health, hygiene and home products company Reckitt Benckiser.

Professor Binks and his team discovered that it was possible to mix water with nanoparticles, such as silica, and air to create a powder. The dry powder reverts back to its liquid form when it comes into contact with skin.