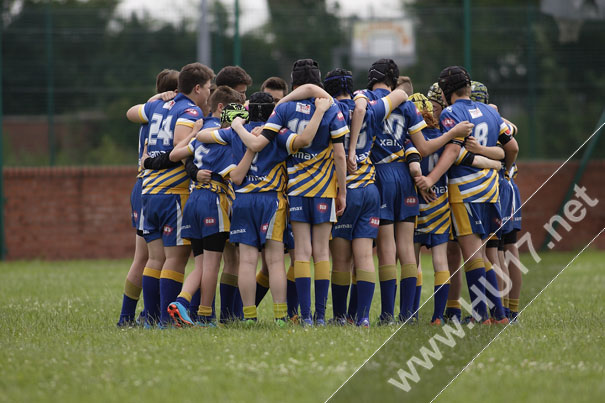 Beverley Braves under 14s are through to the under 15s division two cup final after a 30-6 win at Hull Wyke in a game that they were made to work really hard in by the home side.

It was a glorious, sunny morning at the William Gee sports pitches as the two teams kicked off, and it was Wyke who started the better.

The ball went loose from a tackle and from the resulting scrum, Wyke set up the attack eventually scoring on their left side, the difficult conversion made it 6nil and the Braves had a game on their hands despite Wyke starting with only 12 men.

Beverley finally worked their way into the game and on the back of a strong Will Swainston break down the middle of the field. The position was set for Marcus Walker to pop up the ball to the rampaging George Bennett-Teare, who crashed over, the conversion attempt went wide but the Braves were on the scoreboard with 6 minutes gone.

Four minutes later, this time on the right Henry Hughes began a move that saw stand in centre Tom Baker showed his pace and ball handling skills to put his wing Tom Cohen away. Cohen still had a lot to do but showed great composure to race 30 metres down the touchline to score. The conversion was missed, but Beverley had the lead at 6-8.

There then followed a long period of sustained pressure as Wyke had several repeat sets on the Braves line, this is where the Beverley defence has been strong all season and with Olly Loney leading the way in defence as ever and Lewis Egan showing incredible tenacity Beverley held out.

When a Wyke pass went to ground Ethan Rowbotham was the first to pounce on the loose ball scooping up and brilliantly putting Archie Murdoch into a gap, he was dragged down 10 metres inside the Wyke half and with the home defence on the back foot William Kirkup was first to the play the ball ensuring further progress down the field, the ball finding Murdoch again who in turn passed on to Bennett-Teare to score almost in the same place as his first. Walker was successful with the conversion and the Braves now had an eight-point lead which is how it stayed until half-time.

Half-time also allowed time to assess the troops, Swainston had gone off injured earlier to be replaced by Kai Johnson and unfortunately his knee injury is serious enough to end his season. In addition Jack Turner, who put his hand up to cover in the backs away from his normal position of hooker and did not put a foot wrong succumbed to the illness he was battling over the weekend and was replaced by Josh Pearson.

Pearson would win a penalty later in the game with a strong run after fielding the ball from the kick off. With the changes all made it was back to the coalface, and Wyke once again made Beverley work hard with some good possession on the opposition line, several times in the game Wyke players were held up over the line.

With the pressure absorbed, the Braves began to build up some pressure of their own and Walker placed his cross field kick into the hands of Cohen, who just had to put it down to score his second and with Walker nailing the touchline conversion it was now 6-20 and Beverley had some breathing space.

Wyke would not go away though, remember they played the whole game with one man less so to continue to keep asking questions of Beverley was a credit to them. Beverley held firm with Ollie Gresswell and Hughes putting in a great stint in defence before the Braves then began to show what they could do in attack. Rowbotham was providing great ball from acting half-back for the halves to do their stuff and from one such pass, Egan put out a lovely pass to Johnson, who came on to it at full speed.

Tackling him at that pace takes some guts, but although he could have probably taken the ball further up field himself he unselfishly off loaded to the supporting Murdoch, who needed no second invitation to race down the touchline, around the fullback and score under the sticks, a great rugby league try. Walker’s extras made it 6-26.

It was Murdoch again who raced through the middle just a few minutes later showing great pace to score out to the right. The conversion was missed, but a final place was booked at 6-30. Credit to Wyke, they continued to attack forcing Kirkup to scoop up a grubber on his own line in what was a solid display at full back.

Man of the match could have gone to several players in the end it was split between Bennett-Teare and Cohen.