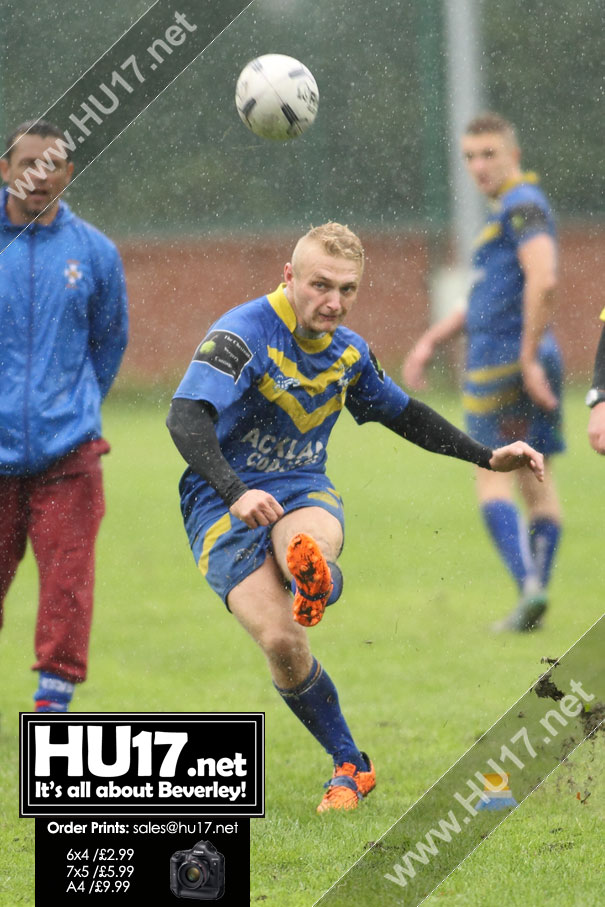 This performance from the blue and golds will rank alongside the finest since they joined the Yorkshire League as they beat the league leaders at the Beverley Leisure Centre.

On a rainy afternoon, these two splendid sides served up a compelling encounter to light up the dark skies. To contrast with the high-scoring encounter between the two sides in the corresponding fixture last April, this was a tense struggle as the two sides went toe to toe in the rain. The wet ball did produce handling errors but did not detract from the unfolding spectacle.

In the early exchanges, very little quarter was given, as both sides weighed in with strong hits in defence. The deadlock was broken in the 10th minutes as the visitors kicked ahead. A cruel bounce of the ball saw Liam Kendall pounce to break away and score with the extras not added. Midway through the first-half Sharlston looked to extend their lead when a break out of dummy half saw them draw the full back only for Liam Frenneaux to chase back in cover to save a certain try.

A few moments later as Sharlston countered, an over-ambitious pass was intercepted by Chris Johnson to put him in the clear. Johnson cursed his luck as the ball inexplicably fell from his grasp with just clear daylight in front of him.

Johnson later atoned following a handling error by Sharlston, which gave Beverley a dangerous looking set close to the visiting line. It ended with Jack Howdle’s astute pass sending Johnson over. Poskitt converted, and Beverley held on for a 12-4 interval lead.

The early moments of the second half saw early pressure for the hosts. A strong burst from Alex Calvert saw a chance go begging as his inside pass went to ground. Calvert again featured with another break, which saw his pass find Josh Poskitt, who was pulled up short as the visitors scrambled in numbers in defence.

The visitors refused to buckle with this pressure and shortly reduced the arrears due to an Adam Jones try which was converted by Jack Kerman. Both sides continued to trade blows until the visitors were awarded a penalty midway through the second half that went between the upright to leave the teams teasingly on level terms at 12-12. They then followed attacks by both sides and a number of unsuccessful drop-goal attempts.

However, 8 minutes from time the visitors infringed at the play, the ball and the home side elected to kick for goal. Josh Poskitt coolly slotted over the penalty to the delight of Beverley’s rain-sodden followers. There was still much defending to do as the visitors had several opportunities to steal the points but Beverley’s self-belief won the day. Beverley’s man of the match was Billy Riby, who has really blossomed as a player this season since returning to the club following a Winter stint at Hull Dockers, which re-awoke his interest.

Beverley now lie 2nd in the table but have played three games more than 2nd and 3rd placed West Bowling and Doncaster Toll Bar. They travel to York Acorn this Saturday- who have very much been their bogey side in two years of being in the Yorkshire League so nothing can be taken for granted. Kick-off is 2.30pm at Thanet Road, Acomb.

Away from the field Beverley received some good news with the award of a grant from the Beverley Town Council of £1000.

The club recently started up a second team, and the award will help purchase another strip to help cater for the rising numbers at the club and support the first team as the club looks towards season 2017.