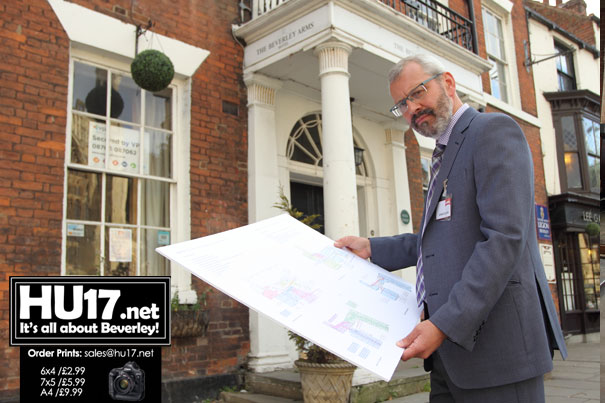 Members of the public were given the opportunity to view the ideas and plans of the Beverley Arms Hotel new owners Daniel Thwaites.

Given the troubled recent history of the Beverley Arms Hotel it is very positive to see things slowly starting to move forward as Daniel Thwaites start to show the community what they want to do.

A building that for some time has been tired and in need of not only a good owner but also a face lift is on course to get one, one that residents are sure to all welcome.

Throughout the day, a steady stream of people took up the opportunity to view drawings at St Mary’s Church.

One of the things that did become clear is that The Beverley Arms Hotel will, if plans are approved by East Riding of Yorkshire Council, demolish the white accommodation block to the rear of the hotel.

Residents and visitors to Beverley will often say the same thing, that the view approaching the town is somewhat blighted by the vulgar white tower block that is part of the building.

Other changes, including how the Beverley Arms Hotel is used will see it no longer be an event’s venue moving away from staging wedding receptions and parties in favour of private dining.

“We were staggered by the response we received. We had positive interest from so many people and we learned some interesting things too.”

“We will be taking on board all the comments made and we are now finalising our planning application and are very much looking forward to bringing this project to life.”

Described by some as an anchor business in Beverley’s Georgian Quarter its closure has had an impact on a number of businesses that have lost trade from people staying at the hotel.

It will take some time before the Beverley Arms indeed reopens with the new owners saying they have a big job on their hands to restore and transform the building to high standards they want to deliver.

Any hope of re-opening part of the building while work goes on or until work, starts were also ruled out with owners saying at the presentation, they will open the whole building when all the work is completed which they hope to be by the of summer 2017.

Based on their other venues locally if the recently refurbished ‘The Judge’s Lodging in York’ is anything to go the wait will be well worth it and will see Beverley gain a high-quality place.