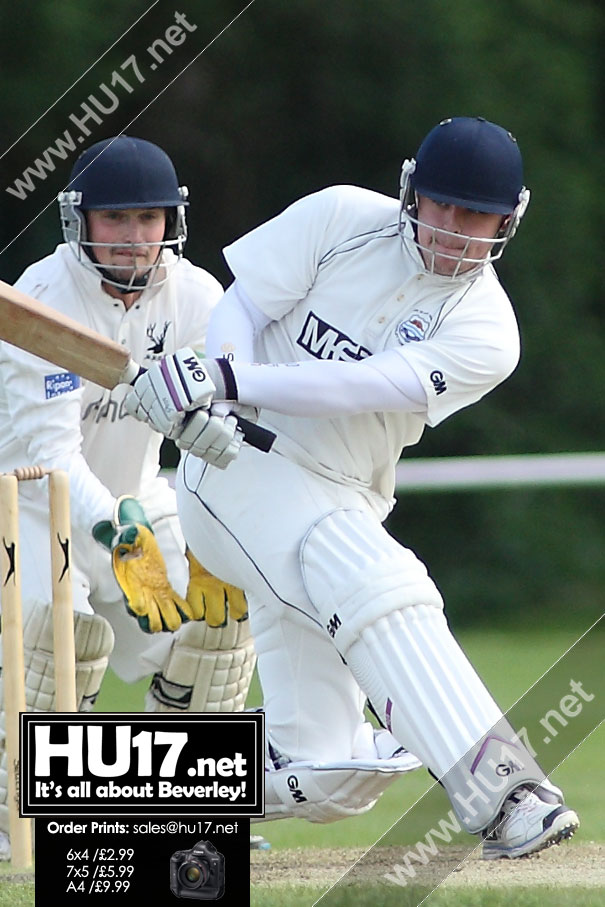 Brad Dobson helped Beverley Town Cricket Club pull off an unlikely win as they turned what looked to be a losing position into a wining one.

The days’ closest finish came the Norwood Recreation Ground as hosts Beverley Town Cricket Club emerged victorious from an enthralling contest which was decided off the final ball.

That had looked unlikely as they slumped to 111-5 chasing Bridlington’s 204, which included 48 from Sam Edmundson and 41 from Simon Leeson, and it was largely down to the efforts of Brad Dobson (88) that they found themselves in a position to win, chasing down 40 from the final six overs following his departure.

Sam Parker (51) and Josh Kelly (50) both hit half-centuries in a total of 246-9, and whilst Ben Kempley replied with 51 for the visitors there was no stopping the runaway leaders as John Potter (4-44) and Ben Danby (5-29) combined to devastating effect taking nine wickets to bowl out the hosts inside 37 overs.

Malton & Old Malton strengthened their position in second place despite being denied victory by Selby’s last wicket pair. Thomas Bumby (51) repeated his effort of the previous week making back to back half-centuries, and Shaun Harland (55) also passed 50 as the visitors piled up 269-8.

All-rounder Alex Bowden was in fine form for the hosts picking up 3-69 before making 42, one less than top scorer Michael Smales. Stuart Watmore was once again in the wickets but despite his 3-22 the home side reached the close on 187-9.

Folkton & Flixton were another of the top five to miss out on victory, despite posting an impressive 290-8 against visitors Sewerby. Richard Malthouse led the scoring with 77 and Jamie Nesfield (70) and Will Hutchinson (60) also made sizable contributions, Harry Gunning the pick of the bowling his three wickets costing 58 runs.

There was also three wickets for Harry Walmsley (3-63) but on a day which belonged to the batsmen the away side replied with 241-7, Scott Cooper (85) and Adrian Long (51) both making the most of the favourable conditions.

Pocklington and Patrington fought out a draw with each side indebted to a stand out batting performance for their share of the points.

Andrew Anderson backed up last weeks’ 72 with a century as the home side scored 227-8, and Brian Butler made an equally impressive unbeaten 85 in the visitors’ final total of 212-7.

The result gives Patrington a little breathing space over their fellow relegation strugglers but that could change as the travel to Whitkirk next week, and things look slightly more perilous for second bottom Pocklington who take on high -flying Malton & Old Malton.

Hornsea were they only side to climb the table this week moving up to sixth after they bowled out already relegated Osbaldwick for just 65. There was wickets for Richard Evans (4-20), Adam Newington (3-35) and Richard Medforth (3-2) with James Smith (23) the only batsman to reach double figures as nine wickets fell for only 38 runs.

Jonathan Fisher then crashed eight four in an unbeaten 37 as the hosts raced to victory off 9.1 overs with all ten wickets intact.