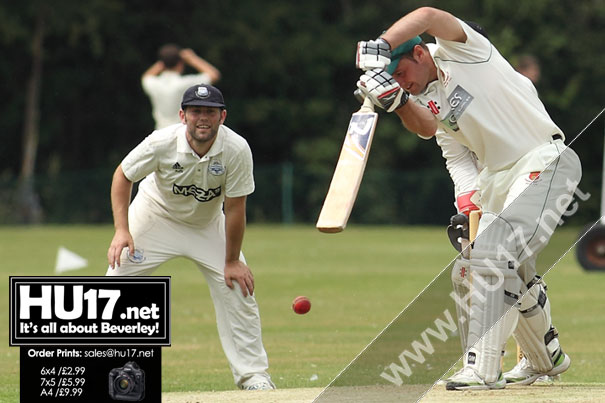 Openers Stephen Piercy (89) and Mark Mierzawinski (56) put on 143 and Matthew Turnbull blasted a quick-fire 73 off just 41 balls as, despite Bradley Graham taking 6-69, the visitors reached 279-7. The hosts could manage only 151 in reply Harry Gamble top scoring with 54 whilst Richard Lindsey (3-31) and Josh Sargeant (3-2) took three wickets a piece.

The second and third placed teams met at Shipton Road, and it was the higher ranked hosts Clifton Alliance who came out on top against promotion rivals Studley Royal.

David Friend took 4-54 and there were three wickets each for Scott Hopkinson (3-20) and Alex Renton (3-46) as the visitors were bowled out for 190 with Andy Mackle finishing unbeaten on 58. The hosts had little trouble chasing down the target loosing just four wickets as John Gilham made 41 and Hopkinson added to last week’s century with 60 not out.

Tom Atkinson scored a double century as Bolton Percy heaped more misery on bottom side Heworth, and at the sametime gave their own chances of avoiding relegation a timely boost, Jamie Rigby (93) also scored heavily as the hosts declared on 321-3. Neil Martin replied with 91 in a total of 175 but the day belonged to Atkinson who rounded things off by taking 4-38.

Ben Kohler-Cadmore made 102 but finished on the losing side as Driffield Town were beaten at Goole Town by 71 runs. The hosts scored 261-8 thanks to a half-century from Ben Shelton (54) and contributions from Antony Gibbins (44), Ollie Ounsley (40) and Chris Mainds (43no). Ben Lamb (5-47) and Ben Earl (3-30) then did most of the damage as the visitors were bowled out for 190.

The mid-table duel between Sessay and Pickering ended in a draw after hosts Sessay were unable to capture the final two wickets required for victory. David Greenlay (3-35), Tim Whincup (3-64) and Tom Sigsworth (3-41) each finished with three wickets as the home side were bowled out for 236, the majority of the runs coming from Mark Wilkie (53) and Matthew Till (77), the latter then took 4-42 as the visitors responded through Chris Nicholls 61, and David Greenlay 72 to reach 214-8 by the close.

Hosts Hull Zingari continued their resurgence getting the better of a drawn match against York. Chris Burn took 4-37 for the visitors but Guy Martinson (62) and Matthew Bunn (38) helped their side reach 244-9. Nick Kay (40) and Ian Jarvis (33) led the reply but the second half of an excellent all round performance from Bunn (3-45) was key in restricting their opponents to 212-8.