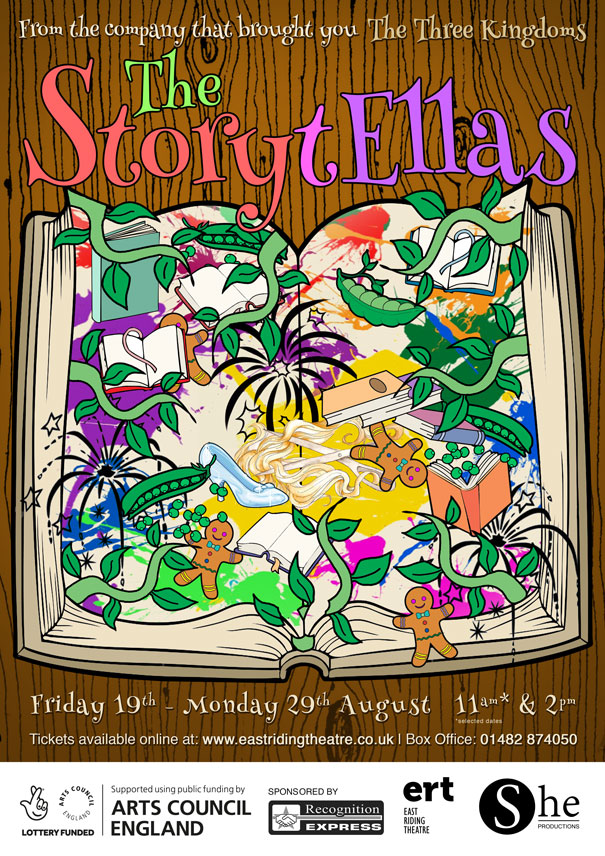 She Productions, the all-female, Beverley based theatre company, is back by popular demand with a new original summer family show, following the sell-out success last year at the East Riding Theatre. It is part of an exciting future programme which has the support of local ‘Hollywood’ actors.

“Following on from the success of ‘The Three Kingdoms’ last year, I am pleased and proud to announce that She Productions is back this summer with a new family show,” said Artistic Director of the East Riding Theatre and Hollywood actor Vincent Regan.

“The new show is set to wow local audiences with its original script, songs and very talented cast. I am always so impressed by the originality of the work produced by She and I cannot wait to see ‘The StorytEllas’ with my family.”

She Productions is the theatre company in residence at the East Riding Theatre (ERT) in Beverley. This August, the company is premiering their new family show, ‘The StorytEllas’; a prequel to last year’s sell-out production of ‘The Three Kingdoms’, written by company members Annie Kirkman and Jessica Duffield. The production is funded by the Arts Council of England and has received sponsorship from local promotional product business, Recognition Express.

With an original script and songs, ‘The StorytEllas’ introduces three self(ie)-obsessed girls who are plunged through the pages of the nation’s favourite fairy-tales. They soon discover the confusion that awaits them: scrambled stories; happy endings misplaced; and their own identities, truly unrecognisable.

The show is also endorsed by Beverley born actress and Poldark star, Eleanor Tomlinson, who has also had leading roles in ‘The Illusionist’, ‘White Queen’, ‘Jack and the Giant Slayer’ and ‘Alice in Wonderland’. She said: “I absolutely loved ‘The Three Kingdoms’ last year and I think it’s just terrific to have a female-led production company based at ERT, creating exciting, new theatre for local audiences.”

In the lead up to ‘The StorytEllas’, She Productions is running free drama workshops at local libraries across the East Riding and is teaming up with local businesses from Beverley for a ‘Find The Shoe Trail’, inspired by ‘The StorytEllas’. The shoe trail is a free event, suitable for all ages, running 23rd July – 14th August 2016.

A variety of beautifully decorated ‘StorytElla’ shoes will be hidden in shops around Beverley, including The Entertainer Toy Shop, Beverley Library and White Rabbit Chocolate Shop. Participants will be able to obtain a trail sheet from the East Riding Theatre. Each shoe will have a clue written on it to lead participants to the next venue. The last shoe will lead them back to the East Riding Theatre where they can submit their trail sheet and have the chance of winning free tickets to see ‘The StorytEllas’.

Company member and writer, Jessica Duffield, said: “The aim of running the library workshops and shoe trail is to create free, fun events for children over the summer holidays. We hope that, by working with the local community, it will help to bring families and new audiences into the theatre, allowing more local people to engage with the arts.”

She Productions has some big projects lined up for 2017. Producer, Ellie Claughton, said:

“We are thrilled to announce that the company is working with the acclaimed John Goober Co. on a new verbatim inspired play about the life of dogs and their owners. Additionally, She is writing a new musical, ‘It’s Different For Girls’, based on 1960’s Hull girl-band, ‘Mandy and the Girlfriends’, in collaboration with director Andrew Pearson of Ensemble 52 Theatre Company and Heads Up Festival. ‘It’s Different For Girls’ will be performed at the Mortimer Suite, Hull City Hall, in March 2017, with a run at the East Riding Theatre later in the year.”

She Productions was formed by a group of local actresses who, after leaving the area to train at drama school and work professionally in TV, theatre and film across the UK, gravitated back to the East Riding in 2015 to set up their own theatre company, committed to devising and writing innovative, multimedia theatre for intergenerational audiences.

She Productions is made up of six members Annie Kirkman, Jessica Duffield, Rachel Barnes, Hannah Levy, Alice Palmer and Hester Arden all originally from and local to Hull and the East Riding.

“She is a very exciting new theatre company crammed with fresh intelligence and motivation with the energy and talent to back it up,” explained company member and RADA graduate, Hester Arden. “It’s born out of a lack of somewhere for this talent to be and a desire for the work and art in our area.”

The company has produced six original shows at the East Riding Theatre since forming in 2015 including ‘Beverley does Broadway’, ‘The Lightless Pumpkin’ and most recently a Victoria Wood tribute evening raising over £700 for York based children’s charity Jessie’s Fund, which Victoria Wood was patron of.

“We have had an extraordinary 18 months since forming She Productions and it has become our mission to make eclectic theatre that immerses the audience from the moment they step through the door.”