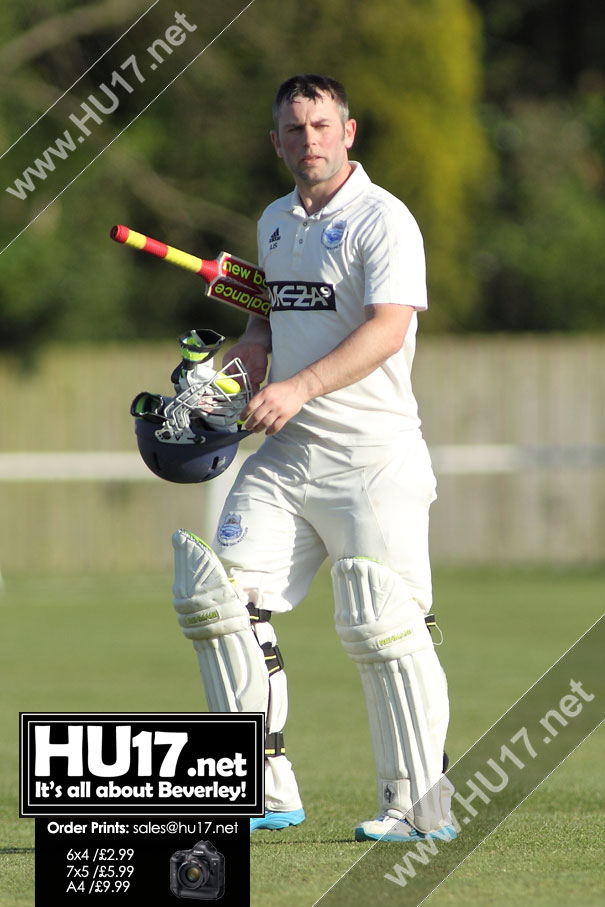 Easingwold gave themselves some breathing space at the top of the Hunters York & District Senior League Premier Division with victory over title rivals Clifton Alliance in a thrilling contest, whilst just below them Driffield Town and Studley Royal swapped places.

Alex Renton produced arguably the best all round performance of the day but finished on the losing side as Clifton Alliance succumbed to the League leaders by just three runs as the top two went head to head at Back Lane. His five wickets helped restrict the home side to 151 which owed much to Paul Skilbeck (41) and Stephen Piercy (36). Simon Williams (33) and Hayden Bradley (32) made solid contributions and Renton finished unbeaten on 40, but it was Piercy (4-37) with a fine individual performance of his own that finished on the winning side.

Driffield Town moved above Studley Royal into third following a three wicket win. Tom Norman (57no) with his second successive half-century saw his side over the line as the hosts chased down 162. Earlier Joshua Chandler had top scored with 30 for the visitors as Ollie Ezard finished with 3-41.

Hull Zingari provided the day’s biggest surprise winning at Beverley Town Cricket Club by 100 runs. Guy Martinson (69) top scored in the visitors 262-8, and Jack Storey marked his return to the club with 39 as Matthew Saint (3-69) and Anthony Spence (3-56) shared the bowling honours. The home sides batting faltered as Callum Hellwig took 5-19, Tommy Hudson (45) the main contributor to a total of 162 all out.

Bolton Percy got the better of a close game at York between two sides at the wrong end of the table. Alistair Rigby (64) and Ed Noble (49) steered the visitors to 228 as Matthew Hodsdon (4-67) and Simon Hall (3-37) shared seven of the nine wickets to fall. Will Stephen (103) hit a century and Toby Giddings and unbeaten 66 as their side narrowly missed out on victory finishing 215-5, Jon Anderson taking 3-43.

Oscar Sugden (70) top scored for Goole Town as they made it three wins from four beating Sessay by four wickets. James Kerr (3-17) reduced the usually free scoring home side to 34-4 before Tim Hall (53) and Tom Wilkinson (30) staged something of a recovery to post a total of 163-7. The visitors didn’t have things all their own way however and only secured victory in the final over with just four balls remaining.

Heworth still await a first win having lost their latest match to Pickering by two wickets. Kieran Bowes finished with remarkable figures of five wickets for just nine funs and Michael Brown 3-37 as the visitors were bowled out for 114, of which Steve Baxter contribute 30. Colin Frank replied with 33 and despite three wickets from Freddie Coughlin his side remain rooted to the foot of the table.