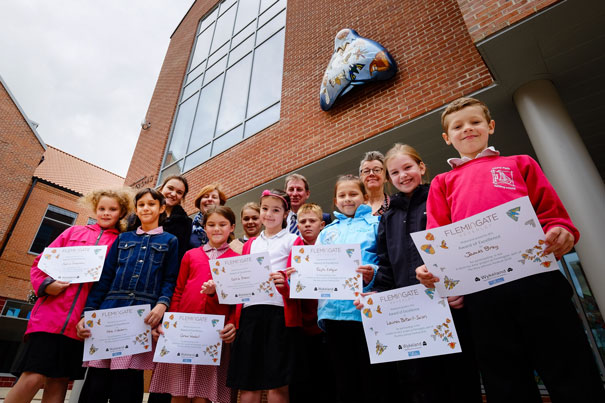 Regeneration company Wykeland Group, sponsor of two of the 1.5 metre-wide moths, gave pride of place to the creations which are situated on the Bridgehead woodland trail, at Wykeland’s fast-growing Bridgehead business park, close to the Humber Bridge roundabout, and at Wykeland’s Flemingate development in Beverley, with both sites forming part of the moth trail.

In separate events held at Flemingate and Bridgehead, pupils and teachers involved in the project were able to see the results of their hard work and creativity as the giant moths were officially unveiled.
Wykeland invited the primary pupils to come up with unique and creative ideas for how to decorate the Flemingate and Bridgehead moths respectively, with help from local artist Liz Dorton.

Ms Dorton, a long-time collaborator with Wykeland on the Bridgehead woodland trail, led a series of workshops with the pupils at both schools to design and create the moths – each with a different aviation-inspired theme.

“Fantastical Flying Machines” was the theme selected for the Bridgehead Moth, with inspiration taken from pre-Wright Brothers flying machines and cartoonist Ronald Searle and his Magnificent Men in Their Flying Machines.

The theme of the Flemingate Moth was inspired by aviation engineer, Sir Geoffrey de Havilland, and entitled “De Havilland’s Magical Moths”. De Havilland was a keen collector of moths, which inspired his designs and the naming of his aircraft.

In addition to decorating their giant moth, the pupils from St Nicholas School were so inspired by the Amy Johnson project, they designed and created over 250 mini moths which will also be on display at Flemingate and will be seen by thousands of people following the moth trail.

“We wanted our contribution to the Amy Johnson Festival to make a significant community impact. That’s why we asked St Nicholas and All Saints schools to design and decorate the moths we sponsored and they have done an absolutely brilliant job.

“These projects have really inspired and motivated the pupils and engaged everyone within both schools. We’re delighted to be able to put the children’s work on show at our Bridgehead and Flemingate sites for so many people to admire.”

“Artist Liz Dorton has worked brilliantly with pupils from All Saints Junior School in Hessle and St Nicholas Primary School in Beverley. Together they designed and painted the moths, and now they have seen the sculptures in their new homes for the first time. Hessle High pupils also created a cluster of techno mini-moths for the Bridgehead woods, and St Nicholas children made a collection of marvellous micro-moths, on display at Flemingate.

“Everyone is hugely proud of their wonderful creations and we are excited that visitors to Flemingate and Bridgehead can now enjoy them too.”

The moths will be on display until Easter 2017.