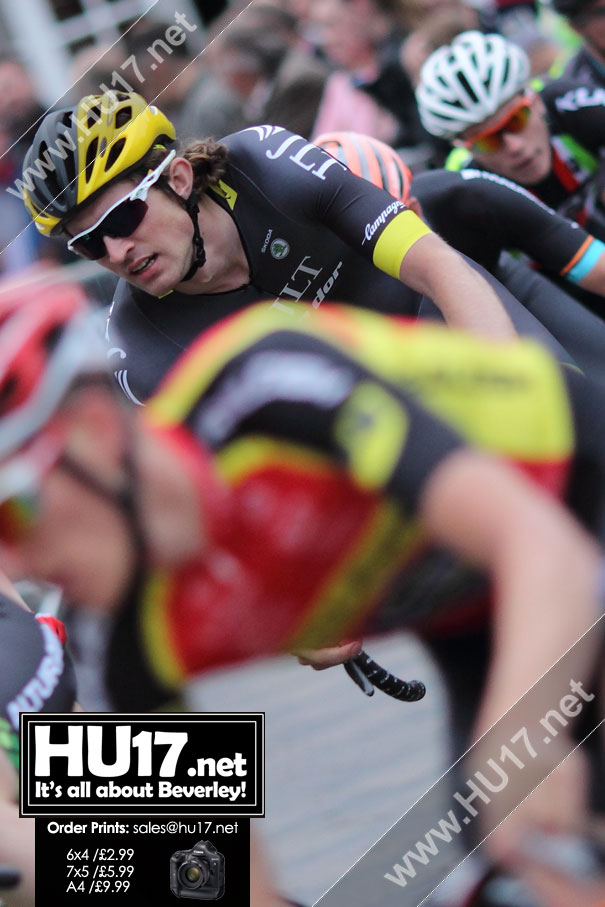 Following the success of the Official Start of this year’s Tour de Yorkshire, the historic streets of Beverley will again transform into a cycling circuit as some of the country’s top riders descend upon the East Riding on Friday, 8 July to take part in the hugely popular Elite Men’s Circuit Race, sponsored by East Riding of Yorkshire Council.

organised by the Hull Thursday Road Club and EY Events, aims to build on the spectacular success of the past ten years and is now regarded as one of the most popular and eagerly-anticipated town centre circuit races on the British Cycling calendar.

The Beverley event has a first prize of £1,000 and a total prize fund of £5,000 and is round four of eight counting towards a national series held over six weeks.

“This is a wonderful example of voluntary groups, East Riding of Yorkshire Council, Beverley Town Council, East Yorkshire Events, Humberside Police and numerous local sponsors working together to deliver a top-class sporting spectacle, that is free to watch.”

The weekend attracts thousands of spectators and brings financial opportunities for the local economy, with Friday’s main event covered by EuroSport TV.

“We are extremely pleased that Beverley will again host this popular cycle race, almost immediately after the excitement of the start in Beverley of the second Tour de Yorkshire. We are expecting very large crowds and I am delighted that this council has once again secured such a first-class national event in the East Riding.

“Major sporting events, such as the cycle race, are enjoyed by residents and visitors alike and provide a welcome boost to local businesses as well as showcasing the East Riding as the perfect tourist destination.”

Some of Beverley town centre will be closed to motorists from as early as 6am on Friday, 8 July.

Motorists are asked to use alternative car parks, such as George Street, Grayburn Lane, School Lane and Trinity Lane. This will also apply to disabled drivers who would otherwise park in Cross Street, Saturday Market and Sow Hill.

Wednesday Market will be closed between 4-11pm.

Sow Hill Road will be closed between 5pm-midnight.

Signed diversions, taking traffic around the town centre, will be in place between 5-11pm.

Car parks in Lord Roberts Road and Spencer Street will be closed between 5-11pm.

Residents living on or next to the race route should be aware that vehicular access to their properties will be restricted between 5-11pm.

There will also be no on-street parking on any roads which are closed, including those covered by the controlled parking zone, namely Lord Roberts Road and Old Walkergate. A letter giving full information will be delivered to all the affected residents and businesses in the weeks before the event.