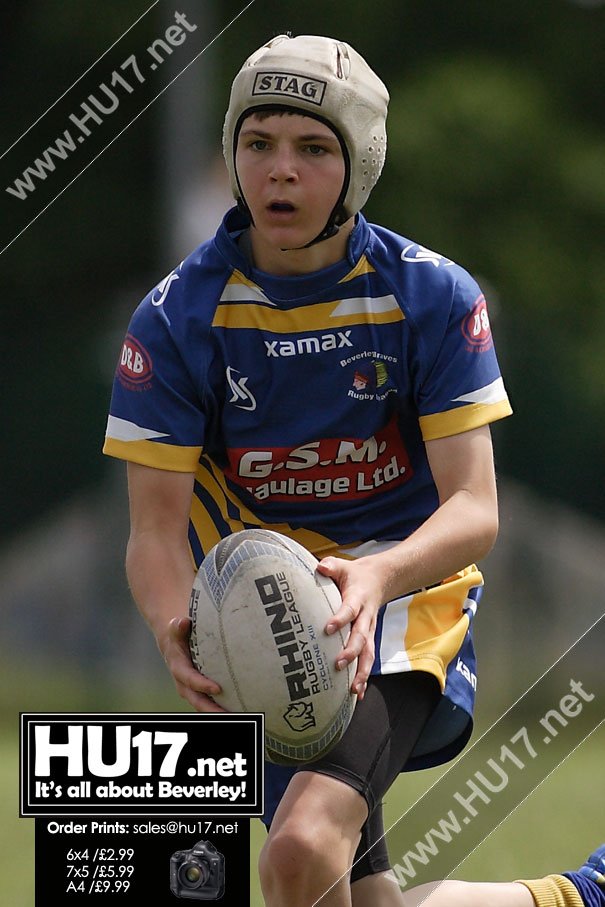 This was always going to be a testing fixture for the undefeated Beverley Braves and midway through the first half, twelve points down it would have been hard to predict such a convincing victory by 42 points to 22 against Hull Wyke, who, like the Braves, had yet to taste defeat in division two.

The under 14s at Beverley are a pretty resolute bunch, and they did not panic. They continued to play their normal game with confidence, which resulted in them turning that 12 point deficit around.

Wyke started the stronger scoring close to the sticks to make it nil-6 with only two minutes on the clock. It was five minutes before the Braves could react, a great run down the right from Harry Vorwerg with an excellent offload to the supporting William Wallis resulted in the latter touching down out wide, no problem for Jack Turner though, who kicked the first of three conversions to make it 6 all. That it is how it stayed for some time before two quick fire tries in the space of three minutes had Wkye well on top in the game by 6-18.

It was a hot morning so team rotation would be key and so after a hard stint in defence Oliver Loney and Oliver Gresswell were the first to have a well-deserved breather, replaced by Ethan Rowbotham and Kai Johnson. After the Beverley kick off bounced into touch the position was set for Marcus Walker to cleverly switch the play back on the inside for Johnson to barge his way over, which once converted but Beverley back within a score.

Both sides found it difficult to get through each other’s stern defence for some time after that score, George Bennett-Teare and Henry Hughes the pick of the forwards doing the hard tackling whilst Lewis Egan once again backed up a great game with the ball in hand with a tireless display in defence. With time ticking away some great runs from Rowbotham and the ever improving Tom Baker helped gain good field position, and Wallis looked to have put Vorwerg away only to be pulled back for a forward pass before Wallis found space again to race 50 metres and touchdown. The half time whistle sounded after Turner converted from wide out and it was all level, 18-18.

With the heat not relenting, the team that did the least defending was likely to come out on top and within five minutes of the re-start a scrum deep in Beverley’s own half started a momentum switching period for the Braves. Walker took the ball on from the scrum running diagonally at the Wyke defence before straightening up, drawing the man and putting Archie Murdoch in the sort of gap he takes full advantage of. Seventy metres later, he touched down under the sticks – 24-18 with Turner’s conversion. Next it was Hughes causing pandemonium as he danced and crashed his way though to score next to the sticks – this time Walker was on hand to convert.

With 16 minutes to go the Braves almost imploded, dissent leaving them two men down for the next seven and a half minutes after Wyke got an unconverted score to make it 30-22. The team spirit from this point on was impressive, the short-handed Braves tackled everything that moved, typified by a great tackle by Ryan Deane and Hughes to put a Wyke attacker into touch very near the corner flag and by full back Ben Hodder, who had superbly mopped up a grubber kick in the first half and took another kick well in goal before bringing the ball to safety.

Despite not having the full 13 it was Bennett-Teare, who seemingly secured the Beverley victory taking a short Egan pass close to the line to crash over. With the conversion, it was now 36-22 with eight minutes to go – surely enough to ensure victory. However, there was no need to worry as quick hands from Rowbotham at acting half-back put Murdoch away again, this time just 60 metres to go for the try, and Walker’s conversion finished the match at 42-22. Hughes and Bennett-Teare who led the forwards well were joint men of the match.