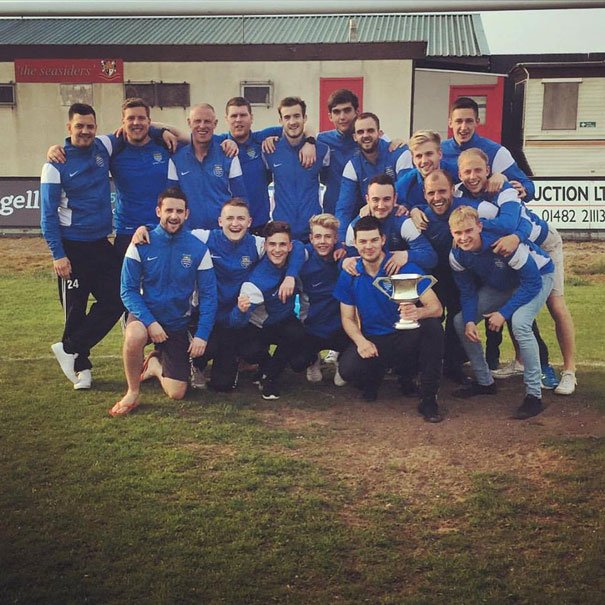 A Michael O’Connell penalty proved to be the winning goal as Beverley Town Reserves have lifted the ERCFL Senior Cup.

In a close fought final in Beverley worked hard as a team to secure the win against a strong Eddie Beadle FC side.

Eddie Beadle had the early pressure as a couple of corners tested Towns nerves, and they soon settled to pose problems at the other end.

Town had a good chance that fell to Stew Scott, but his low shot was well saved. O’Connell also put two good crosses in that created chances for Town, but the chances were not taken.

Another fine ball found Alex Stark, who put his volley over the bar but midway through the half Town did manage to take the lead.

Good build up play found Scott whose cross to the back post was headed into his own goal by an Eddie Beadle defender.

The same player was responsible for keeping the score at 1-0 when he cleared Stark’s goal bound shot off the line.

In the second half, Town looked the most likely to score as they again caused problems down their right-hand side through Scott and William Harrison.

Town eventually doubled their lead after they were awarded a penalty for handball which O’Connell calmly deposited in the bottom corner.

However, Town guaranteed themselves a nervy last 15 minutes when they conceded a goal and had a couple of players struggling with injuries after making their 3 substitutions.

Despite having the majority of the possession in this period, Eddie Beadle were not able to create it into chances, and Town returned home with the cup.

Player manager Shaun Gibson was delighted by the performance of everyone in the squad of 16 and is looking for this to be the catalyst to more success.