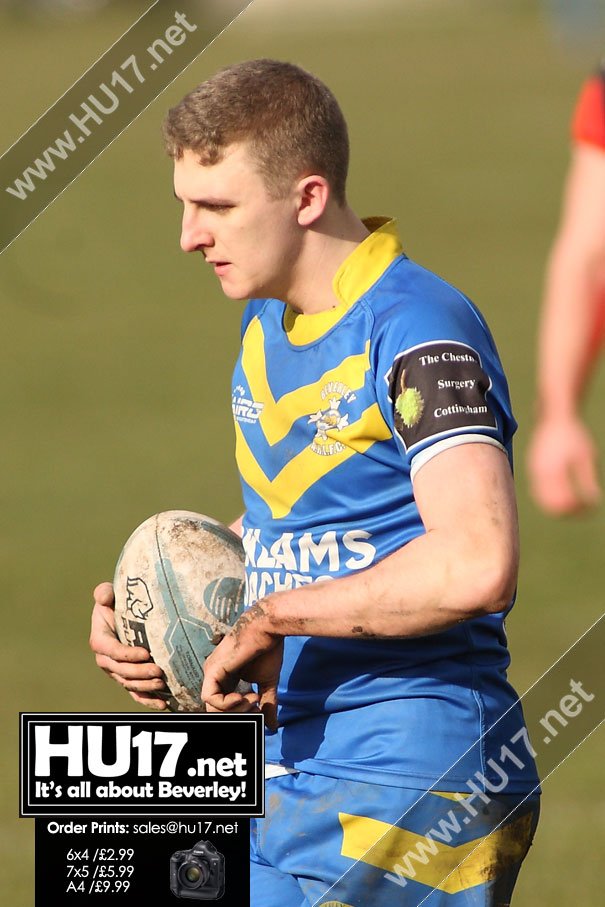 The blue and golds went into this fixture with a whole host of regulars missing.

Alex Calvert, Jack Howdle, Bobby Howdle, Lee Stevens, Matt Liggins, Glen Anfield, Tom Shires, Billy Riby were all missing for a myriad of reasons but in all honesty, it was always going to be a tough game with even a full-strength line up. The South Yorkshire outfit fielded strength and size across the park in all positions.

This was combined with very quick ruck speed, which saw them constantly gain more ground than was comfortable for the visitors. The long absentee list forced Howdle and Taylor into a major re-shuffle of the starting lineup. Arron Martin was given a rare start in the centre, and Joe Morley started at prop.

For the first 15 minutes of the game looked as if the makeshift line-up would do the job for the visitors. After Lewis Poskitt’s dribble into the in-goal area forced a line drop out, the next set saw them take the lead after 7 minutes. Jack Humphries show and go saw him pierce the home defence to dive over. Josh Poskitt added the extras.

Beverley’s lead looked like increasing in separate incidents. Beverley were pulled back for a forward pass, and Craig Morfitt was ruled offside when touching down from Steve Connolly’s kick into the in-goal area.

These misses proved costly as Carl Minns added tries for the hosts in the 15th and 26th minute. Then followed a real killer blow as the re-start kick was fielded by Toll Bar winger Shaun Cary, who went the full length of the pitch to score. The visitors tended to put pressure on themselves by frequently spilling possession early in the tackle count. The hosts ‘route one’ game plan proved effective as their strong runners sapped Beverley’s energy. The score remained at 16-6 until the break.

Beverley had a few early second half forays into the Toll Bar 20 which came to nothing. The home side absorbed the early onslaught and Gary Cary and Dean Roberts added 53rd and 55th minute touchdowns respectively, and with extras added a 28-6 deficit was too much for Beverley. The visitors did refuse to buckle under. Lewis Poskitt who tried hard all afternoon long forced a line drop-out with on of his cross-field kicks.

In the next set, a Beverley attack came to nothing. But a as Toll Bar were running the ball away from their own line, they lost the ball and Tom Radley snatched the ball to get a pass out for Louis Hubbard to score. Josh Poskitt converted.

Carl Mills completed his hat-trick for Toll Bar to stretch their lead to 32-12. In the closing stages as the home side attempted to rub things in a certain try was prevented as Beverley’s man of the match Tom Radley appeared to come from nowhere to cover tackle the Toll Bar winger who had beaten at least two other cover tackler on his way to the line.

The Yorkshire Premier League is certainly a steep learning curve for the blue and golds but with some returning bodies this weekend the coaching staff are far from downhearted.

This Saturday Beverley will make one of their longest trips this season to Halifax to face Illingworth, who they defeated last March in the semi-final of the 40/20 cup.