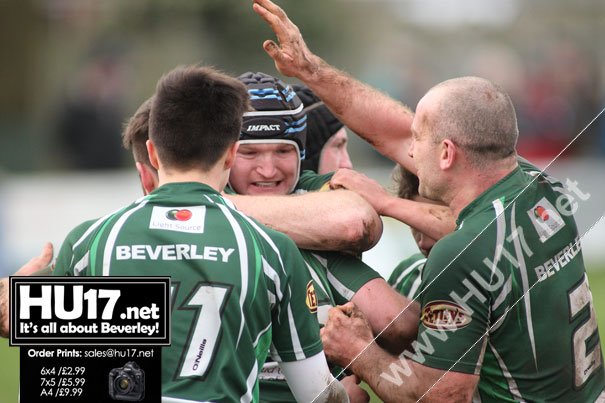 This was the twice postponed fixture between these two clubs and needed to be moved to Driffield since the Beverley ground was previously booked for the annual minis and Juniors festival and what a fine performance it turned out to be from the Beavers.

They made a fine start and after only 2 minutes Luke Hazell broke from his own 22 and went on a mazing run slicing through the Northern defence to carry the ball into the Northern 22 where it was switched out to Rob Smith on the wing who touched down wide out.(5-0).

The Beavers continued to look sharp but after 17 minutes Northern mounted a rare attack and poor tackling let in No 8 Collins (5-5). This setback for Beverley encouraged Northern and they proceeded to mount a series of attacks on the Beverley line. Eventually after 30 minutes they were rewarded with a try by off half Cawthorne which Collins converted (5-12).

Again Northern pressed and the Beavers did well to hold out until relief came with a penalty from Phil Duboulay (8-12).

Beverley started the second half well and started to dominate proceedings. After 5 minutes Phil Duboulay reduced Northerns lead to one point with a penalty (11-12) after a fine break by James Graham was halted close to the posts. Duboulay followed this up with a beautifully worked try of his own, which he also converted (18-12).

Three minutes later Luke Hazell made an interception inside the Beverley 22 and raced the length of the field to score under the posts(23-12). Duboulay again converted (25-12).

Next it was the turn of Rob Smith to score in the corner (30-12) to secure the bonus point for Beverley. Northern were not finished yet however and Collins scored his second try which he also converted (30-19). In the last move of the game a scuffle broke out just inside the Northern half and from the resulting penalty Jockey Holmes kicked it in Phil Duboulays absence (33-19)

Thus the final score of Beverley 33 points Northern 19 condemned Northern to joining the Beavers in relegation. Beverley however can be proud of their performance which has been a feature of the way they have played latterly and are left wondering whether things may have been different had some of their youngsters been available to them earlier in the season.

However, the signs for next season are very encouraging if they can hang on to them and they look like having a nice blend of youth and experience to build around.