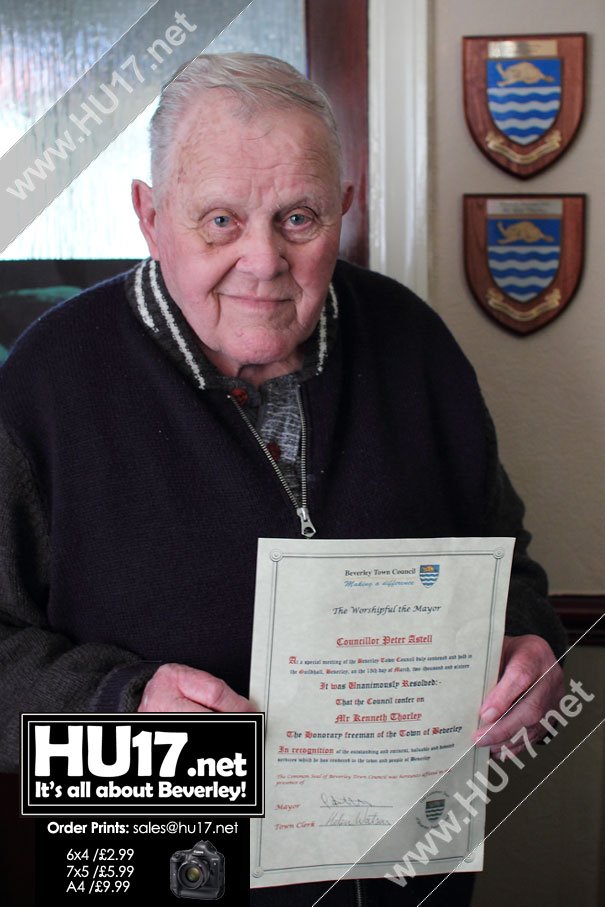 Ken Thorley says he feels very proud after he was made a Honorary Freeman of Beverley by Beverley Town Council.

“I feel very proud to have got this award. I was certainly not expecting anything, I just got a letter asking me to attend the Guildhall in Beverley.”

Mr. Thorley has been a great supporter of Beverley for many years.

Born in Beverley he started work with the Beverley Corporation as an apprentice painter and continued to work for Beverley Borough Council and Humberside Council.

As a man he has always been involved in his community and has been part of the Cherry Tree Centre since it was first established in 1996. He served as a Councillor on Beverley Town Council and is a former Mayor of Beverley.

In recognition of his achievements Mr. Thorley was presented with a special plaque and certificate both of which will soon take pride of place at his home in Beverley.

“We are all really proud of dad. It is amazing what he has achieved since he retired and the effort he continues to put in at the Cherry Tree Centre.”

“As a family we never thought he would be Mayor of Beverley and now he is an Honorary Freeman, it’s amazing.”

Mr. Thorley was present with his award at a special event hosted at The Beverley Guildhall where he was joined by Mike Guest who was award the same accolade for his services to Beverley.

Honorary Freeman is a power that is very rarely used and is normally only awarded to local people who have in the opinion of the Council, rendered eminent services to the Town.

Being an Honorary Freedom of the Town does not convey with it any legal rights or responsibilities, other than a ceremonial role at civic functions.