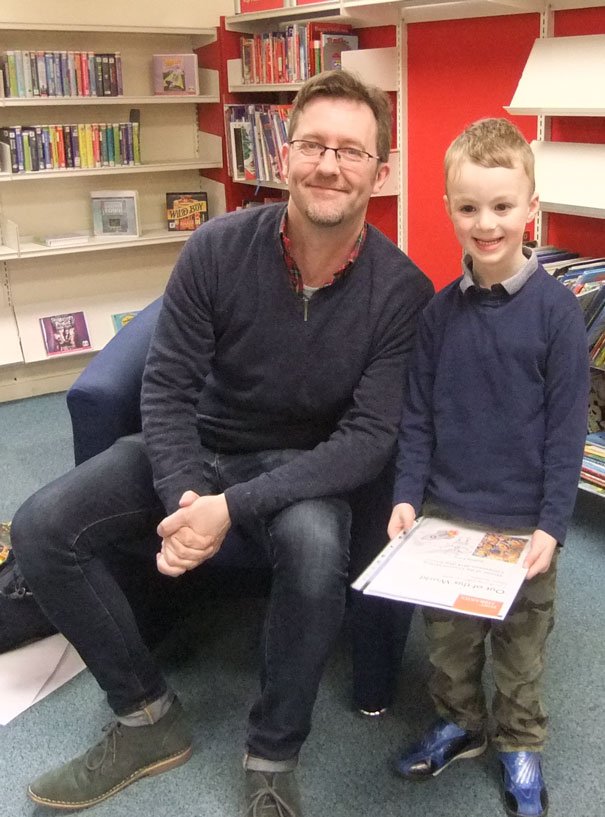 Beverley Children’s Library welcomed author and illustrator, Simon Bartram, for a special storytime and prize- giving event to celebrate their ‘Out of this World’ competition winners.

East Riding Libraries ran two space-themed competitions under the heading ‘Out of this World’, inspired by Tim Peake’s journey to the International Space Station.

For the first competition, which began on National Libraries Day, children were asked to nominate their favourite book and write it on a cardboard star, which was then attached to the outline of a rocket.

At the end of the competition, all stars (over 950) were collected from libraries across the area, and three winners were drawn at random; Lottie Skinner (aged 3), from Beverley, who chose Tabby McTat, by Julia Donaldson; Alfie Taylor (aged 5), from Anlaby, nominated Starwars Rebels by Michael Kogge; and 8 year old Jack Pattinson, from Goole, chose The BFG, by Roald Dahl.

The second competition encouraged children aged 4-11 to write a creative piece about which book they would send up to space in a time capsule, and why.

Joshua wrote a piece about why he would send Charlie and the Chocolate Factory into space
“…The Martians would like it because they like chocolate!”

Poppy wrote about a book called ‘The Love Bugs’ with some great advice for budding astronauts;
“…In space, everyone should remember their loved ones at home”

And Kyle cleverly suggested putting sections of three books to share more stories with whoever finds the time capsule.

Librarian Katherine Richardson said : “ We had a fabulous event on Saturday with 23 children attending. It was great to meet Simon as well, who even designed an alien for us!”