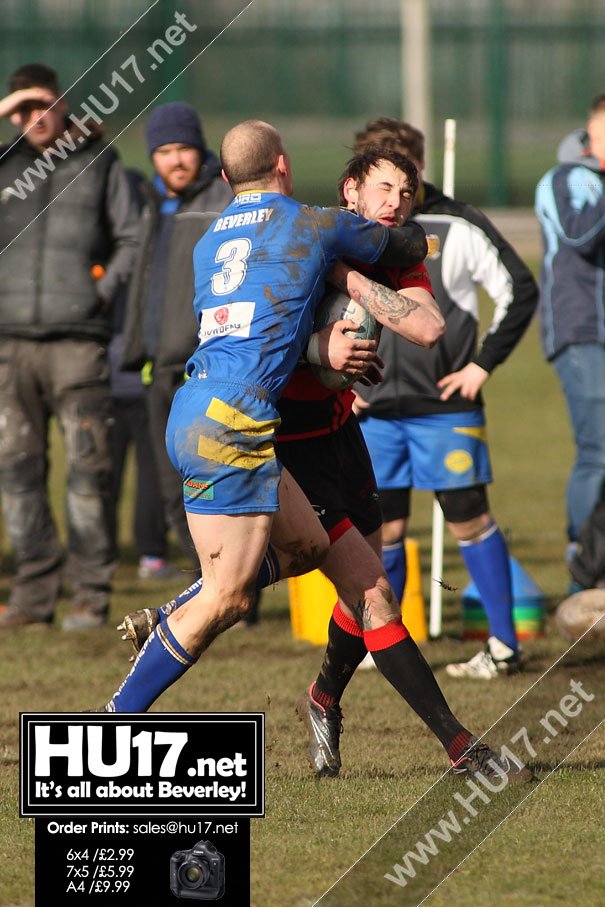 The blue and golds will be disappointed with this result having clawed their back from a 12-0 deficit to lead 16-12 with just 15 minutes to go.

The turning point of the game appeared to be when a Norland kick on the fifth tackle was fumbled and gave away repeat set. Norland took advantage to regain the lead and add a further two scores in the closing minutes to give the final score a rather harsh look from Beverley’s point of view.

Beverley were confident ahead of the game with a debut handed to Alex Calvert in the second row and Sam Coleman and Jack Humphries returned to the centre and loose forward respectively after recent absences.

Captain Tom Radley recovered from a recent back injury to also pack down in the second row, and Ben Naylor was recalled into the other centre position.

Conditions were very soft under foot and there was an icy wind in favour of the hosts in the first half. Indeed, the home side looked well on top in the opening half an hour. Beverley spent most of the time defending in the own half of the field and struggled to make much headway when in possession.

Norland managed two converted tries during this spell to lead 12-0. As the end of the half approached the visitors seemed to be weathering the storm. They got some repeat sets inside the Norland 20 and after sustained pressure, they registered their opening score.

Bobby Howdle stabbed the ball into the in-goal area for substitute Billy Riby to dive and score. Howdle added the conversion to put Beverley back in the hunt with half time fast approaching.

Just after half time the visitors were enjoying their best spell. Pressure inside the Norland 20 almost produced a try for Ben Naylor. He stretched out to pounce on the ball following Walker’s chip into the in-goal area but could not cleanly ground the ball.

However, a few moments later, the visitors again got good field position after strong defence forced a handling error. Again on the last tackle Walker’s clever grubber kick into the in-goal saw Billy Riby pounce to score his second try with Howdle converting to level the scores at 12-12.

The pendulum appeared to be swinging in favour of the visitors at this stage with hosts appearing to look out on their feet.

Beverley continued to roll forward, and Chris Johnson’s kick ahead was fumbled by a Norland defender giving the blue and golds another repeat set. The set ended with Walker’s well weighted chip again into the in-goal allowing debutant Alex Calvert to pounce and score wide out.

The conversion could not be added but with a 16-12 lead 15 minutes into the half, it seemed if the visitors could hold their nerve a hard-earned victory looked to be on the cards. The Norland outfit had other ideas and after a penalty got them the field position that they needed they regained the lead.

Shortly after Lewis Poskitt appeared to snatch the lead back for Beverley jinking through to score put was pulled back for what seemed to be an obstruction back in play.

After then the hosts added another 12 points to seal a win against a slightly shell shocked visitors.

Man of the match was Bobby Howdle. Coach Pat Howdle was disappointed but took some positives from the day, he said;

“When we took the lead in the second half, I thought our fitness was showing through, and we would go on to win but it wasn’t to be and we move on to next week.”

This Saturday Beverley are at home to Bentley in their next 40/20 cup game.

The Doncaster outfit have remained in Division One this season. The two sides met twice in 2015 with a victory apiece.

Kick-Off is 2.30PM at the Beverley Leisure Centre.