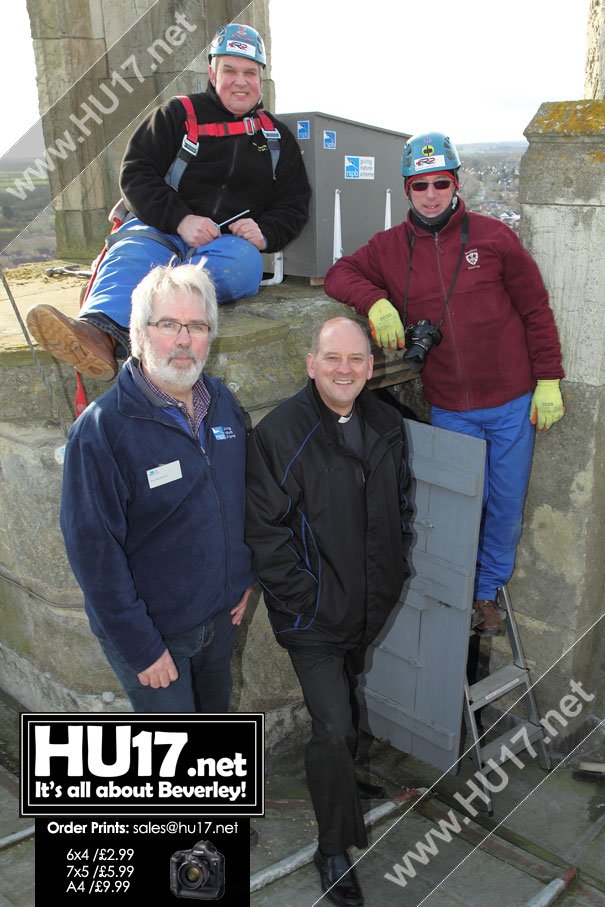 Nature conservation organisation the RSPB and Beverley Minster are hoping to provide a home for breeding peregrines after installing a specially designed nest box on the tower of the Gothic church.

Peregrines traditionally breed on cliff ledges in the countryside but in recent years have colonised our towns and cities with tall manmade structures such as tower blocks and churches serving as excellent nest sites for the bird of prey.

A pair of peregrines have been in residence on the towers at the west end of Beverley Minster since last July and were observed teaching their young how to hunt. The new nest box should encourage them to remain there from early spring to raise a new family.

The nest box, which was provided by the RSPB, was installed on the roof by the Minster’s craftsmen Steve Rial and Paul Hawkins, who had the difficult task of hauling the large construction up the 50 metre-tall tower during recent bad weather and ensuring it was securely fixed to the exposed surface.

Revd Jeremy Fletcher, Vicar of Beverley Minster, said: “It was a great thrill to see the peregrines adopt the West Front of the Minster. They make quite a noise, and are beautiful to watch. Seeing the adults raising their young and showing them how to feed was very special, and we hope that the next box will help this be an annual event.”

There are a number of urban locations around Yorkshire where the RSPB aims to encourage breeding peregrines by placing nest boxes this winter.

Mark Thomas from the RSPB said: “We hope peregrines take to the nest box and provide residents and visitors to Beverley with an opportunity to witness one of the most spectacular birds on the planet.”

Peregrines are the fastest animals in the world and have been recorded at speeds over 200 miles an hour, approximately three times as fast as a cheetah.

They virtually vanished from our skies in the 1960s due to the impact of pesticides but have since recovered with around 1,300 breeding pairs in the UK.