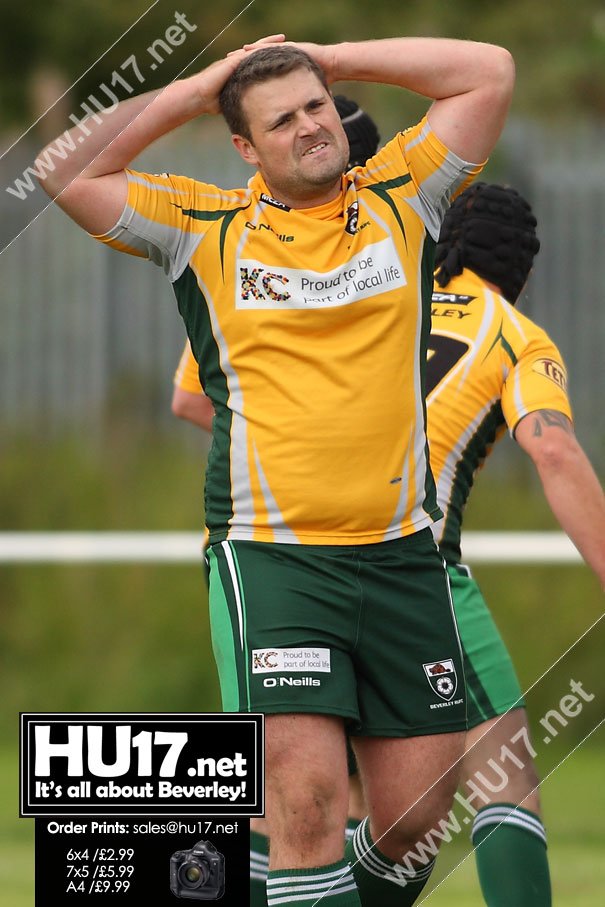 This was an all too familiar Beverley afternoon. Bags of endeavour and wholehearted effort and plenty of the play but in the end nothing to show for it.

Up front there was not much in it but in the backs Guisborough held all the aces and their big powerful runners produced some brilliant play to run in all but one of their six tries. Until halftime Beverley were still in the game having battled up the slope to restrict the home side to a 15-3 interval lead. Their eventual undoing was almost certainly due in part to the loss of skipper Phil Duboulay for nearly all the second half with a head injury.

Beverley started well, Duboulay kicking a long range penalty in only the second minute and then two minutes later unluckily seeing a second kick from an identical position drift narrowly wide in the strong crosswind. They were enjoying plenty of the ball early on but when Beverley lost possession near the home line Guisborough showed their intent by quickly moving the ball and breaking clear. Only a tremendous recovering tackle by Duboulay on halfway prevented a try.

After quarter of an hour Guisborough got on terms with a penalty by full back Christian Pollock and then took the lead with a try by winger Alex Ruff after Jamie Gill had lost the ball in the home 22. It was an error that proved costly. Had Gill not ignored an overlap outside him instead of trying to go it alone it may well have led to a try for Beverley and not resulted in Guisborough getting one at the other end.

To turn round 8-3 down would probably have been acceptable to Beverley given the advantage of the slope to come in the second half but Guisborough scored again minutes before the break through a lovely converted try by their fly half Will Muir. At 15-3 it looked a different proposition.

Within eight minutes of the resumption Guisborough had added two more tries from Ruff and Muir. The second rounded off some superb backplay and would have been a fine try had it not been spoilt by the scorer indulging in some unnecessary triumphalism as he sold a dummy to score. At 25-3 the game was as good as beyond Beverley. Moreover Beverley had lost the influential Duboulay which left them looking slightly disjointed. It would be unfair to say that Beverley heads went down because their never-say-die attitude never wavers. But it was clearly a more or less impossible situation and Guisborough were able to make the most of it.

Some of the home threequarter play was probably as good as anything we are likely to see all season. The young Beverley back division which included several Colts were on a hiding to nothing. But they gave it everything. Will Webster on the wing had a splendid game making some excellent runs and tackling fearlessly. Luke Hazell at full back had one tremendous run, cutting clean through the home defence before being brought down in full flight by a shuddering high tackle. The referee Steve Penfold is one of the best on the circuit but from the touchline the culpit looked to be remarkably lucky to get away with nothing more than a talking to.

A sparkling move from deep in their own half brought another converted try for Guisborough before Beverley eventually got some reward for their afternoon’s spirited efforts. From a penalty line-out the pack drove impressively to the line and Ashley Ienco went over for a try. Gill converted to make it 32-10 but at the death Guisborough themselves drove over from twenty metres for their sixth try.

Once again Beverley’s spirit and endeavour throughout could not be faulted. But sadly it is only results that count. Their young players all did well and if Beverley can hang on their emerging talent the club’s future should be secure. In the meantime what they badly need are a few victories.