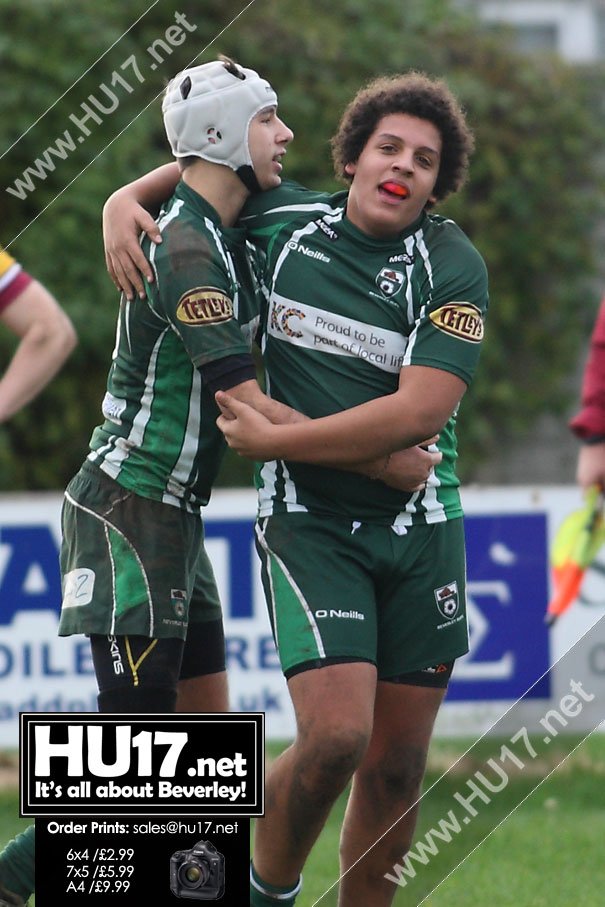 Beverley came up with the goods over a good sandal side that had not been beaten thus far in the league
the game was played in blustery but clear conditions, and Beverley kicked off with the wind in their faces. The game began as a bit of an arm wrestle with both sides running hard at each other.

It always felt that Beverley had the stronger back line and not to disappoint they opened the scoring with a strong running back’s move which resulted in Chris Chapman crossing close to the corner. Against the wind and with difficult conditions, the try was unconverted (5/0)

It appeared at first that Beverley might have an easy day of it but Sandal had other ideas. Loose play by Beverley allowed the sandal centre to kick on and then heads went and the perusing Beverley backs pulled back the sandal player, and the ref went straight under the posts awarding the penalty try.

This was the just reward for good sandal play and sloppy play by Beverley. Under the posts and with the wind, the conversion was good (5/7)

The front row of Harvey Rann, Ben Smith and John Marshall were strong in attack and made the ball difficult for a weakened sandal front row to contest. in phases Smith and Marshall combined really well in midfield. This lead to a combined interchange of backs and forwards and a strong final drive saw Lewis Szrama go over for Beverley’s second try under the posts. Joey Franklin converted on the 30th minute (12/7)

Going into the end of the half and not for the first time the sandal backline attempted an interception, and this time was successful. From this, their interceptor ran the ball hard and was pulled down on the 22m line of Beverley. However good recycling and further mistakes by Beverley let sandal go in for the second try close to the end of the half. The conversion was good. (12/14) Beverley knew they were in a game.

Halftime came, and a few tactical words were had. Although the coaches had their say it is very much to the credit of the team that they are more than capable of analysing a game and passing out information to improve.

Changes were made at halftime with the welcome introduction of Jack Garvin into the centres. Heavy hitting and hard running by the forwards allowed space on the wing. The ball came to Chris Chapman, and he finished off from 40 out; a fine run for his second try. The conversion was missed. (17/14)

The sandal team carried on game fully but realistically from this point the game was Beverley’s. Further backline movement saw Harrison Mayou go into effectively put the game out of sandals reach. the try went unconverted. (22/14)

The next back to score was Jack Garvin. Carving his way through the sandal lineup and beating a further two players he went in untouched under the posts. This time the conversion was good (29/14)

Sandal came back on the attack and were pressing with their backs on the Beverley 22m line. Luke Hazell showing how to do an interception. He snatched the ball from the air and set off. running the full length of the pitch and touched down under the posts. Franklin converting. (36/14)

Shortly before the end of the game Beverley were pushing a now tired sandal. the forwards setting up and retaining the ball very well. Having sucked the sandal defence in, the Beverley backs ripped it up and the final pass went to Luke Hazell, who ran in close to the posts. The conversion was good (43/14)
the matched closed shortly after with no further score.

The Beverley players will take this for what it is; an emphatic Beverley win seven tries to two. There were mistakes, and it is expected that the return match will be much tougher but for now Beverley can celebrate being the only side in their league who remain unbeaten.