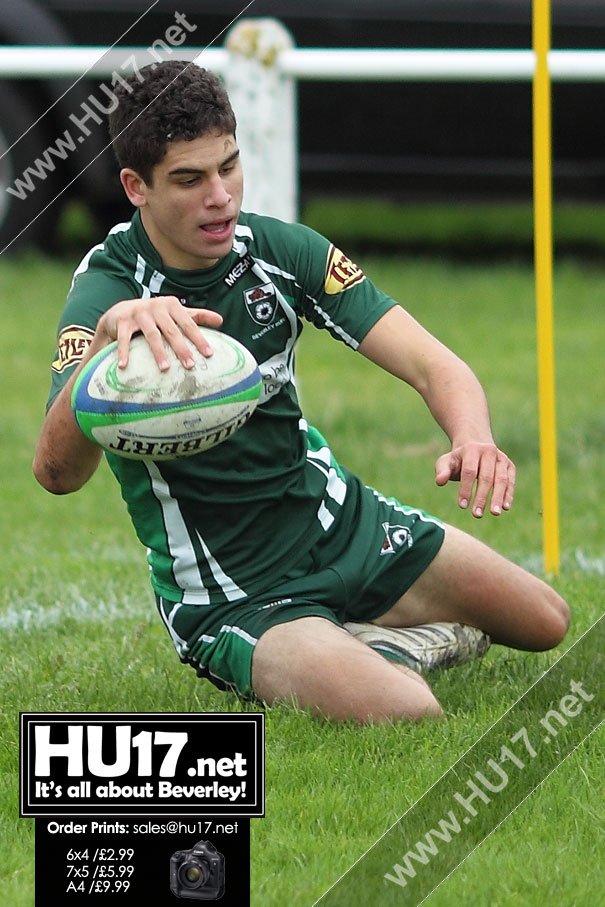 In what was to prove a fine performance by Beverley Colts, Beverley ran out eventual winners over Wharfedale colts. Wharfedale had made the long trek from Grassington to Beverley and it proved to be a fruitless one for the Premier division side.

Beverley kicked off but the kick was short, gifting the opposition a scrum on the halfway line. Wharfedale with the much heavier pack made the most of the scrums putting pressure on Beverley. Their number eight picked up and made headway for Wharfedale.

Consistently high standards of defending saw these thwarted on a number of occasions and Wharfedale became frustrated over their lack of penetration into Beverley territory. The Beverley scrum going backwards still functioned really well with excellent service being provided by Alfie Hart Fisher and this allowed the backs space to use their creativity.

From the back of a scrum quick ball allowed the backs to combine well and from a move which sythed through the Wharfedale defence Beverley took the lead.

Full back Luke Hazell finishing off in the corner (5/0) The conversion was missed and despite pressure from Beverley this is how the half ended. At this point in the game victory was still there for the taking for either side

Wharfedale kicked long at the start of the second half, the ball was caught well by Rob Cunningham with hard running smashed into the oncoming Wharfedale pack. Beverley were again on the front foot and drove into Wharfedale territory. Sustained pressure resulted in a Beverley lineout ten from the Wharfedale line.

Beverley won the line out and drove for the line. The subsequent ruck saw a quick pick up from Alfie Hart-Fisher who smashed through the Wharfedale defenders to go over near the post. The conversion was kicked by Jockey Holmes (12/0)

Some superb passing from Holmes and Chris Chapman gave the Space for Hazell to cruise down the side line for 60 metres, past his opposition and under the posts for his second try of the day. The conversion was good (19/0) It was at this point that the Beverley coaches started to relax thinking job done.

However, the game was by no means over and Beverley pushed home their advantage with about fifteen to go. A great series of interplay between the backs and forwards saw Hart-Fisher again burst through the opposition to score his second try of the day.

For the first sixty minutes the game had seen a good even level of refereeing with penalties being conceded by both sides. However it was at this point that Beverley appeared to give away penalty after penalty. Culminating in a yellow card for Will Cook.

Subsequently the last ten minutes were spent as tackling practice by Beverley, one man down, in an effort to keep the Wharfedale colts out of the Beverley try zone.

They managed this which was very much to their credit and in fact sums up the effort and the team spirit within the Beverley Colts. The lines were cleared and the final whistle blown.

Beverley progress to the next round of the national cup and for their gallant opponents all they were left with was the long trek home.