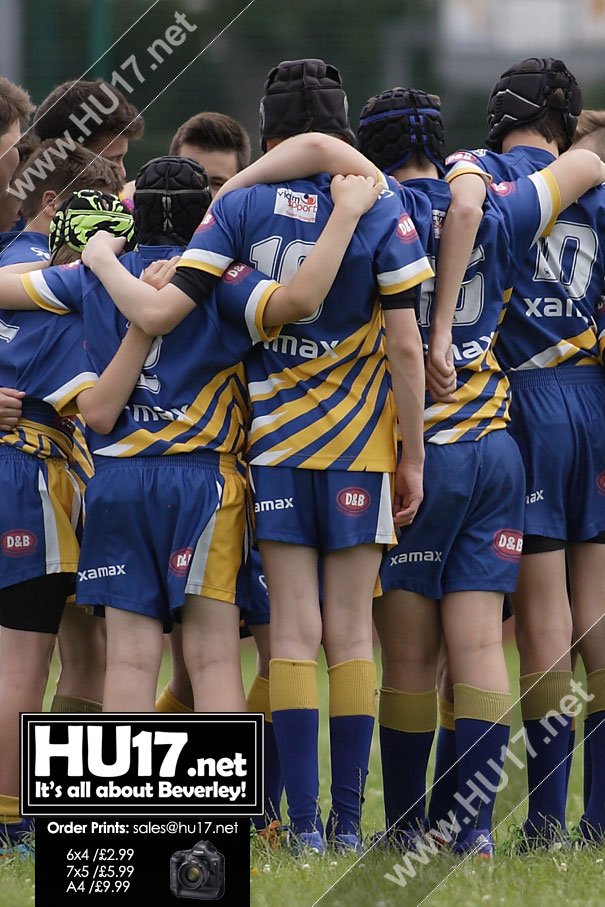 A dominant first-half display saw Beverley Braves under 13s get back to winning ways with a 30-0 win at Hull Victoria Titans. A damp, misty autumnal morning greeted the Braves at Eastmount, but they got into top gear right from the start with prop Kai Johnson fielding the kick off and powering straight up the field – route one rugby league.

With the ball in the Victoria half, Beverley looked to find a way through the home defence with lively scrum half Lewis Egan causing chaos from the off. The Braves would no doubt had scored in this first set but were pulled back for a forward pass. At the resulting scrum, the Braves forwards did what was done to them the previous week and put the push on to win possession against the feed.

Ethan Rowbotham was first on to the ball and although hauled down his quick play the ball, fast hands from acting half back Jack Turner and an accurate pass from Marcus Walker saw the ball in the hands of a rampaging Johnson, who powered over beneath the posts. Turner’s conversion made it nil6. Beverley were on the attack again from the kick off with Rowbotham making a great break down the right, jinking inside before feeding the supporting William Wallis, who does not miss chances like this as he raced away to touch down. The conversion was missed, but it was nil10 and Victoria had yet to touch the ball.

In the greasy conditions, handing the ball was difficult and the inevitable knock on gave the ball to Victoria in a dangerous position – time for the Braves to step up in defence. Step up they did with Will Swainston (before he had to go off), George Bennett-Teare and Oliver Gresswell working extremely hard in the forwards to keep the Titans at bay.

When Victoria spilled the ball the resulting scrum on the Braves 10 metre line saw Rowbotham pop up with the ball. He went down the short side, drew his man before putting Archie Murdoch away down the right. Speedster Murdoch outpaced the Victoria cover defence to score under the posts. Turner added the extras, and it was 0-16 after 17 minutes.

Second tackle after the kick off and Johnson barged through the defence on the half way line and then continued to make his way up the field, breaking tackle after tackle before scoring his second. This was an ideal try for the prop forwards book of tall stories, whilst the run was a good 50 metres in a few week’s time Kai will be describing how he went the full length of the field!

That was not the end of the scoring because next came the candidate for try of the season, a real team effort. Bennett-Teare making the initial break up the right-hand side, passing on to Rowbotham, who found the ever reliable Gresswell in support who in turn off loaded out of the tackle to the supporting Bennett-Teare, who was eventually brought down forty metres out.

Quick hands from Turner to Egan and then a magnificent looping pass whilst running at pace from Walker to Wallis had the Titans defence clutching at fresh air. Wallis took the pass drew the remaining opposition defender before perfectly timing his pass to give Murdoch the open space to score on the left, a fantastic rugby league try to make it nil26 at half time.

Victoria started the second half well and made a strong burst through the middle. Murdoch got back to slow him down, but it was Tom Cohen whose cover defence saved an almost certain try. This field position led to a period of Victoria pressure with some dubious knock on calls presenting them with four consecutive sets on the Braves line. This sustained pressure came to nought as the Beverley defence worked hard with a big stint from Josh Pearson, Ollie Loney and full back William Kirkup.

Finally, the tide turned and Beverley were able to work the ball up field on the back of several scoots from Ryan Deane. The sixth tackle came, and Henry Hughes took the ball chipped over the top and then won the race to touch down his own kick, a great piece of individualism and deserved reward for a season of hard work.

With the conversion missed the game ended at 30-0 to Beverley and a respectable eighth position in the league.

Men of the match Johnson and Wallis.