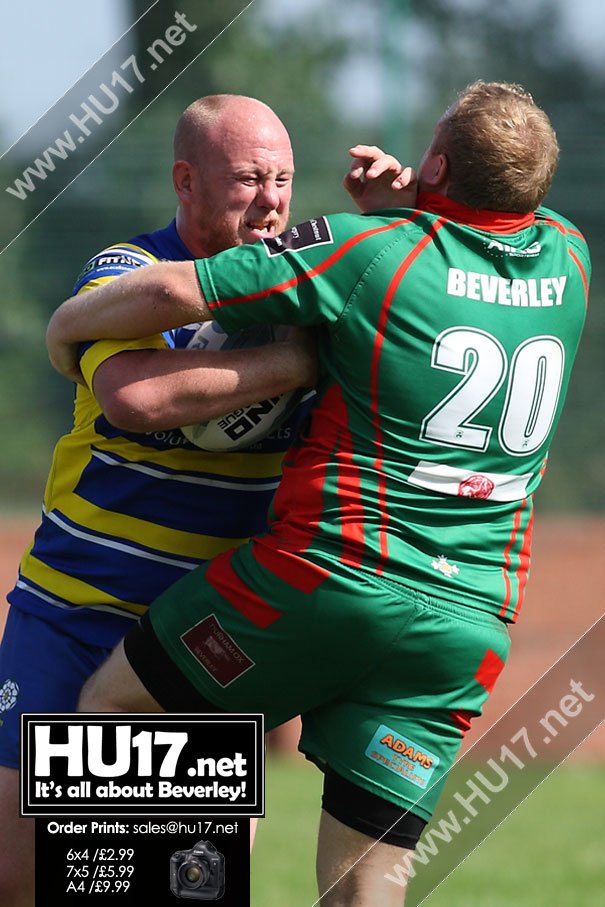 Beverley ARLC managed to hang on for the points in this one against a spirited Bentley side from South Yorkshire whose beefy pack of forwards just never stopped plugging away until the final whistle.

“I am not going to say much. It wasn’t pretty, but we achieved the object of the exercise which was two league points.”

This latest win consolidates fifth position in Yorkshire Division One behind Siddal ‘A’,Hull Wyke ‘A’,York Acorn ‘A’ and leaders Mirfield Stags that seem to have more or less got the title wrapped up.

With just three games to go a place in the top four play-off does remain a possibility for Howdle’s men if they can win all three. The first of those games will be Saturday September 5th away to York Acorn ‘A’.

Bentley had the better of the opening exchanges as their weighty pack put pressure on the Beverley line with route one rugby.

Beverley’s defence held firm and managed to get some field position down the visiting end which paid dividends.

Louis Hubbard celebrated his return to the side by forcing his way over from close range. Bobby Howdle adding the extras. Beverley again had to defend a number of sets close to their line but were again more than equal to the task.

Beverley then increased their lead on the 25th minute when Jack Humphries, who really has been Beverley’s find of the season, went on one of those typically elusive runs and then sent supporting winger Lee Falcus in to score behind the posts. Howdle again converted.

Bentley were not phased, and more pressure by them resulted in a converted try five minutes later.

As the break drew closer the hosts forced a handling error from Bentley. They then got the ball from the resulting scrum and debuting full back Ellis Clarke broke through and was unlucky to be dragged into touch with the line at his mercy.

But right on the stroke of half time, man of the match Lewis Poskitt who was playing a real captains knock steadied Beverley’s jitters. Deep in his own half he chipped over the top, re-gathered and sidestepped his way around the chasing cover to score. Howdle again converting for a 18-6 lead.

Early in the second half the home side attempted to turn the screw and finish their opponents off.

Several attacking plays close to the Bentley line were well defended and came to nothing. Then 15 minutes into the second half the visitors ever dangerous prop forward forced his way over and the extras were added to peg the score back to 18-12.

The restart kick went into touch and Beverley’s possession close to the Bentley line saw Guy Adams go over the line but lose the ball in the act of scoring with a flurry of defenders around him.

Moments later, when the visitors were penalized for a ball steal, Bobby Howdle added a penalty goal.

As the game moved into the final 15 minutes, a kick from deep in his own half by Lewis Poskitt saw Beverley give good chase to establish field position. They then forced the handling error and in the next set, Jack Humphries sent Louis Hubbard over for his second try wide out.

With eight minutes to go Jack Humphries then stroked over a drop-goal to seemingly seal the match. However, the never-say-die visitors added two tries in a nervous last five minutes. The final whistle was then greeted with a huge sigh of relief from coach, spectators and players alike.

Due to the Challenge Cup Final, there are no scheduled fixtures this Saturday.