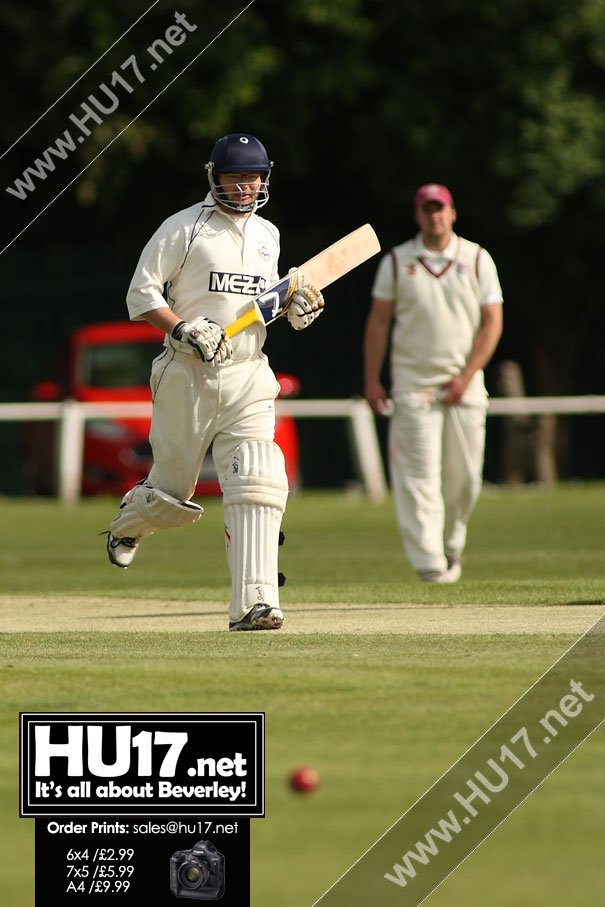 Beverley Town Cricket Club first team travelled to Stamford Bridge on the back of two victories with confidence running high.

Skipper Jonathan Fisher won the toss and elected to bat. Despite an aging slow pitch, he and Olly Grantham followed their half century stand the previous week with a hundred partnership before a mix up led to the skipper being run out for 36.

Rob Fish again showed a lot of promise as he played conservatively early in his innings before playing aggressive shots to score 33. Anthony Spence continued the aggression scoring a run a ball 21 and Andy Burton played some fantastic shots to hit 44 from 27 balls.

Grantham was finally dismissed for 83 and will be disappointed not to make it to three figures, but a final total of 247-6 put town in a good position at the half way point.

Stamford Bridge started their run chase in positive fashion and were soon 65-0 form 13 overs. Debutant Sam Welburn was introduced and immediately reduced the scoring rate and picking up the first wicket of Stuart Boyle for 41.

Matthew Mudd returned for a second spell and found his line and length to clean bowl the Sam Tennant for 60 and quickly after the Stamford Skipper Matt Beckett. Stamfords middle order mounted a spirited rebuilding of the innings and moved the home side into a winning position at 183-3, requiring just 65 from 10 overs.

A direct hit ran out Tom Hoggard for 46 followed the next ball by Keiron Thompson clean bowling Kevin Murphy for 22. Greg Whyley bowled 7 of the final overs for 30 runs showing great nerve and control of his leg spin. He worked well in partnership with Thompson and then Mudd who finished with 36 wickets.

Although Rich Robinson 28* got his side close to the target Stamfords loss of wickets made the chase more and more difficult as a flurry of Burton Run Outs saw Stamford Bridge finish on 231-9.

This was another good display by Beverley, whose confidence is growing with three positive results in a row. Town now host Heworth hoping to gain revenge on a poor performance earlier in the year.

Although skipper Fisher is missing on Saturday, the availability of Jonny Vodden and Jamie Roe following family commitments this week should bolster the team.