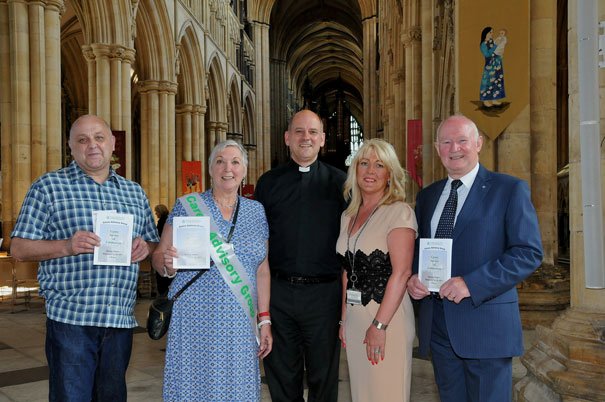 The extraordinary dedication of a “silent army of carers” across the East Riding has been celebrated at a unique service which has been held at Beverley Minster.

Music, song, and dance brought the majestic settings of the Minster to life when it hosted the annual Carers Service of Celebration.

Carers past and present took their seats alongside civic dignitaries, including East Riding of Yorkshire Council chairman Councillor Peter Turner, for the service which was designed to celebrate the invaluable contribution that carers make to their local communities.

Head of adult services at East Riding of Yorkshire Council Rosy Pope gave an opening address to the congregation, paying tribute to the “extraordinary dedication of carers” and in particular the “silent army of carers without which the health and social care system would struggle to cope.”

Speaking after the service Rosy said: “It was a real privilege to be a part of such a unique celebration of the caring community and the invaluable work that they do.

“It was fantastic to see so many people supporting the event which proved to be emotive, joyful, thought provoking, but above all truly appreciated by everyone.

“I would like to once again thank everyone involved in helping to make such a poignant event happen.”

Guest speaker, dementia awareness campaigner and former global music merchandiser Tommy Whitelaw, spoke of his time caring for his late mother Joan over a five year period until she lost her battle with the disease in 2012.

Tommy, who has worked with such renowned music artists as Kylie Minogue and U2, spoke of the sense of love, loss and loneliness that a carer can experience and paid tribute to all those attending the service, saying: “This is a room that can make a difference to people’s lives every single day.”

Key addresses, hymns, and prayers were interspersed with music, song and dance with a special performance from the Makara Morris Dancers and a solo vocal performance by Neil Griffiths.

David Howarth, chair of the East Riding Carers Advisory Group (CAG), who also addressed the congregation, has thanked everyone involved in the success of the service which is one of the highlights of the CAG Calendar.

“It was nice to see so many happy, smiling faces after the service and it has been a privilege to be a part of the celebration,” he added.