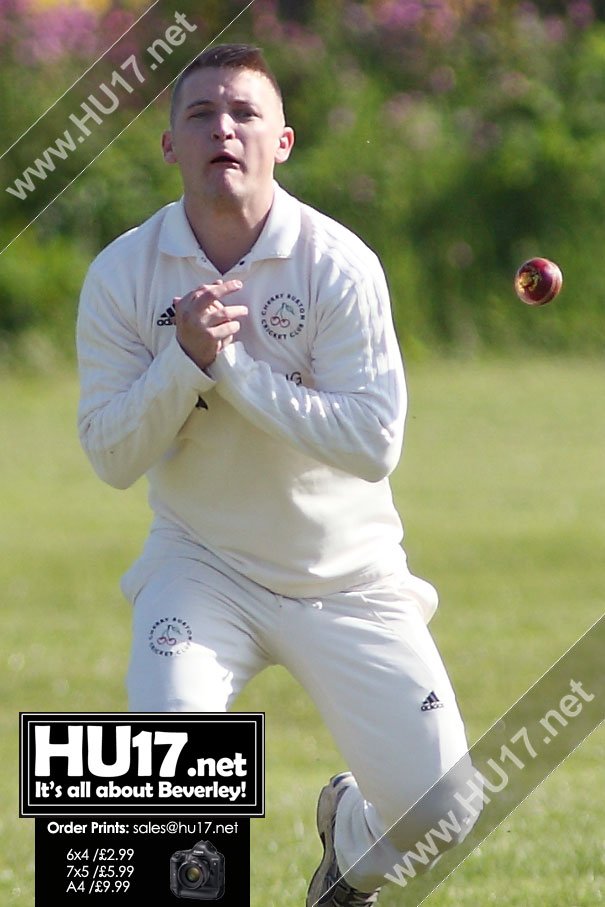 Cherry Burton Cricket Club played Hessle CC in what was a close encounter until Terry Ventress came on to take 5 wickets for just 14 runs.

Hessle CC won the toss and elected to bowl. Cherry Burton finished on 160 all out from 40 overs with Matthew Spencer hitting a quality 91, with Big John Wilson holding the fort at the other end.

Hessle then came out to attack the Cherry bowlers from the off with Dan Sayer hitting a steady 25, before edging one to keeper Spencer off the bowling from Butt.

Love struck Butt seemed to improve the more he progressed through his spell.

After 17overs, skipper Stew Scott decided to make a change and bring on Terry Ventres and Olly Baldwin.

They both bowled very tight with Ventress turning the game. Hessle where 103-3 after 25overs, to only be bowled out for 110.

After the game skipper Scott said;

“It was a quality win against a strong Hessle side. Matthew Spencer batted amazing today, hitting 91.”

“I’m gutted for him not to get his century but his time will come, he’s too good not to get one.”

“As for Ventress, he proved today that there is plenty of life left in the old dog yet.”

“His bowling and Spencer’s 91, where the difference for us today.”

“The fielding was also quality from everyone, with Jamie Ord taking a quality catch from deep mid-on.”

“Special mention to Jamie Grainger who came up from the second XI to take 3 wickets for just 9runs.”

Next Saturday see’s Cherry Burton travel away to top of the league North Ferriby.