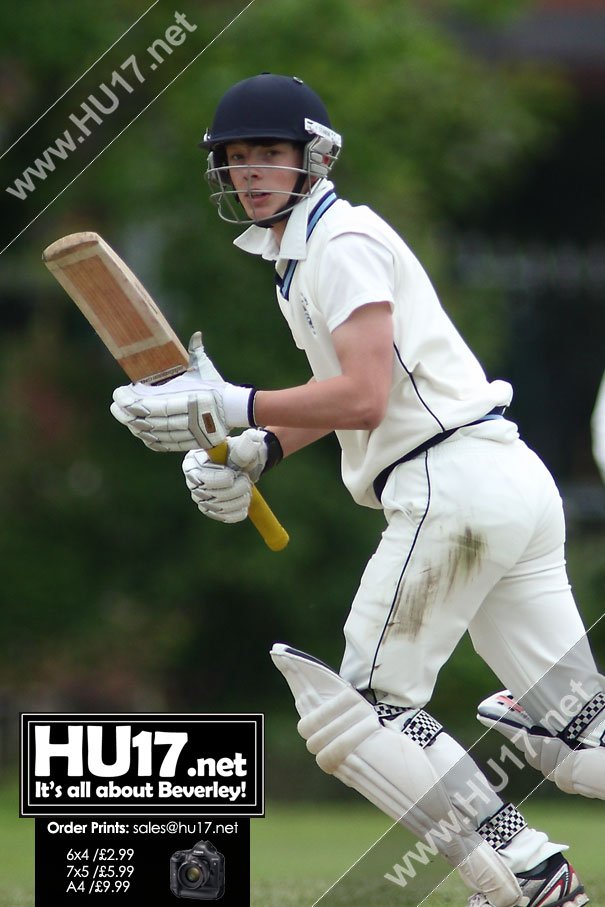 There was little change at the top of the Hunters York and District Cricket League Division One table as the matches involving the top three all went according to form providing little in the way of drama, however that was not the case at Old Malton Road where the home side lost by single run to Bridlington in the game of the day.

The visitors total of 170 owed much to Casey Rudd who finished two short of what would have been a well deserved century, made on the back of last week’s 56 against Beverley Town II. That the home side remained in the contest owing much to the efforts of Wayne Dawson (3-26) and Stuart Watmore (3-31). Malton & Old Malton’s reply began in the worst possible fashion as the slumped to 44-6 from the first 16 overs, and it took an eighth wicket stand of 88 between Tom Bumby (80) and Ryan Gaughan (18) to bring them back into the game, but despite the pairs heroic endevours it was Tom McMeeken (5-38) who’s effort proved the more decisive.

Nicky Johnson had a day to remember for third placed Driffield Town II as they played host to leaders Sessay, but despite a hat-trick and a half-century he still finished on the losing side. Matthew Till (112) with his second century of the campaign received support from Nick Harrison as the visitors scored 263-7, a total which proved well out of reach of the home side, which was all out for 179, despite an unbeaten 59 from Johnny Addy to go with Johnson’s effort. Stuart Pierse, Liam Carver and Stephen Langstaff all took three wickets as Sessay made it four consecutive wins at the same time ending ‘Town’s unbeaten start to the season.

Second placed Goole Town kept pace with the leaders posting the days highest total of 293-6 to beat Folkton & Flixton by 160 runs, Ben Shelton (104no) and Ashton Nottingham (58) doing most of the scoring for the visitors.

Whitkirk beat Bolton Percy by five wickets, a result which same them take fourth place from the visitors. Having been set a target of 266-8 the home side had Mark Murphy (115) and Simon Webb (85) to thank for a successful chase, the opening pair scoring the majority of their sides total for the second week running in. Earlier in the day Peter Housman (111) and Alistair Rigby (69) had set things rolling for the visitors Joe White also making an unbeaten 40 in a match dominated by the bat.

Mike Hattee (110) and Jonny Rawsthorne (60) scored 166 for the fourth wicket as despite good work from Adrian Long (4-13) Osbaldwick finished in 224-7 against Sewerby, but the home side were unable to force a victory as the visitors closed on 167-8, M Artley top scoring with 50.

It was a similar story between Pickering and Beverley Town Cricket Club second team, five of the Pickering batting line up got beyond 20 but none made it past 35 despite which their total of 202-6 was sufficient to earn them the bulk of the points against the visitor’s that came within 12 runs of victory with eight wickets down, Greg Whyley having led the chase with 53.