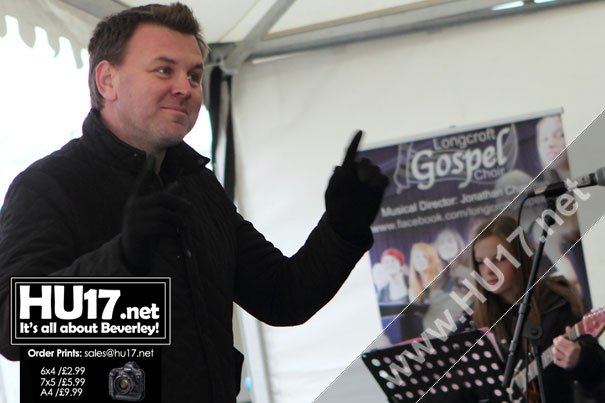 Longcroft School in Beverley is celebrating after its Gospel Choir was chosen to play a part in the Rugby World Cup 2015.

The choir is one of 20 selected from England and Wales to welcome the teams who will be competing from around the world later this year.

Longcroft’s Gospel Choir will perform the official Rugby World Cup anthem, World in Union, at the welcome ceremony for the England team in London in September.

Welcome ceremonies will formally welcome each team at iconic locations and will include the presentations of official Tournament caps and Rugby World Cup 2015 participation medals.

Longcroft School was chosen following an application process led by leading independent charity Youth Sport Trust, which was open to all schools in England and Wales.

Managing director of England Rugby 2015, Stephen Brown, said: “Congratulations to Longcroft School’s Gospel choir on being selected to be involved in the welcome ceremonies for Rugby World Cup 2015. We were really pleased with the response that we got from schools wanting to be involved.

“We now have 20 excellent choirs from across England and Wales that will help us to welcome the participating unions to the Tournament and make it a celebration of rugby. We hope this will provide them with unforgettable memories and give them and the teams a fantastic Tournament experience.”

Youth Sport Trust chief executive Ali Oliver added: “We hope that it will impact not only the pupils performing, but the whole school to engage with the Tournament in a way that inspires learning. The Youth Sport Trust is delighted to support and work with Longcroft School and England Rugby 2015 and we look forward to seeing great creativity in the school performances.”

Ian O’Donnell, headteacher at Longcroft School, said: “Longcroft School is thrilled to be part of this prestigious international event. Alongside other successes, the school has a long history of both sporting and musical achievements, which makes welcoming the England rugby team all the more special.

“We are very proud of our Gospel Choir, which continues to go from strength to strength. Everyone at Longcroft wishes them luck and will be flying the flag for England, as they compete against other teams from around the world.”

Jonathan Chapman, assistant headteacher and Longcroft Gospel Choir Leader, said: “An important part of the choir’s ethos is that no-one has to audition and it is totally inclusive – students sing purely for the love of it, which shines through. We have performed at a wide variety of events, ranging from local festivals and weddings to taking to the stage at Euro Disney. This forthcoming performance to cheer on England’s finest rugby players will be an amazing once-in-a-lifetime opportunity.”

Councillor Stephen Parnaby, Leader of East Riding of Yorkshire Council, said: “I have had the pleasure of hearing the Longcroft Gospel Choir perform and they are fantastic. I am delighted that the choir has been selected for this accolade.”

Students say they are thrilled to be taking part. Madeleine Rann (17) said: “I almost can’t believe that we have this amazing opportunity to welcome the England team. We’re all really excited to share this experience and we will be working really hard in rehearsals and do our best to make it a fantastic ceremony.”

Joanna Patmore (18), said: “I, along with the rest of the choir, feel extremely privileged and proud to be part of such a wonderful sporting event.”

Stevie Mould (18) said:”This is an opportunity that does not come around every day. I know that as a choir we are going to grasp this performance with both hands. We are really proud to be able to welcome England.”

Connor McConnell (18) said: “I feel it is an overwhelming privilege to welcome England. It is even more special, as being a member of the Longcroft Gospel Choir is something I love. It will be a unique opportunity for us all to share.”