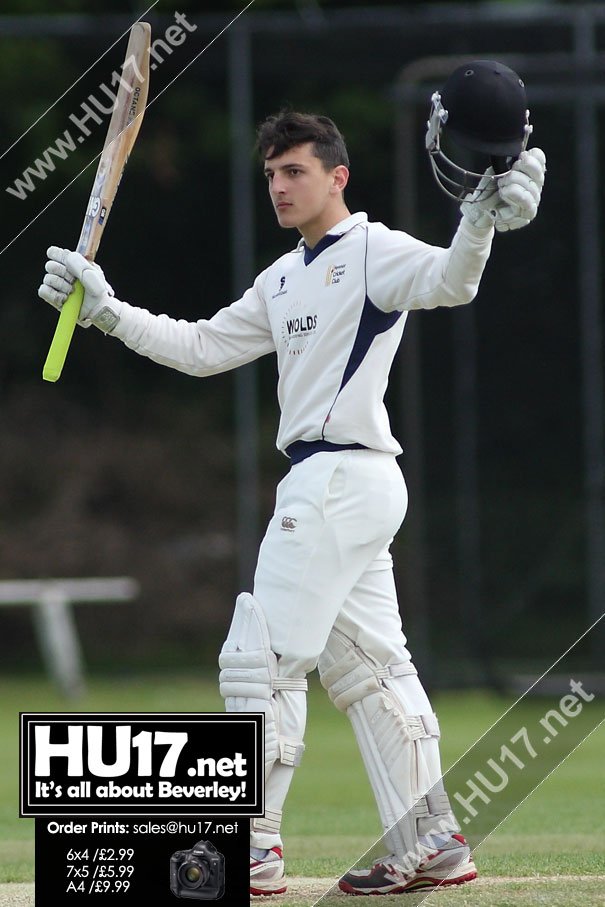 There was no change at the top of the Hunters York & District Senior Cricket League Premier Division this week as the top four sides all picked up maximum points.

Ben Hatfield was once again on top form for Fenner as they got the best of the draw at Beverley Town Cricket Club, having finished unbeaten on 91 a fortnight ago, he was not to be denied a century this time round and finished with 106 out of the day’s highest total of 290-5. In excellent batting conditions the home side then made 252-5 in replay which was enough to secure maximum batting points.

Chris Booth (73) and Nick Hadfield (72) shared a second wicket partnership of 131 for Woodhouse Grange, that and an opening stand of 57 between Hadfield and Andrew Bilton (36) helped the League leaders to a total of 250-4 against Heworth. The visitors made a promising start but when Oliver Sherwood was third out with the score on 98 the rest of the innings fell away, the last seven wickets adding only just 14 more runs, Christopher Suddaby (5-23) responsible for most of the batting side’s woes.

Second placed Sheriff Hutton Bridge kept up the pressure on the leaders, maintaining their unbeaten record by inflicting a first defeat on league newcomers Scarborough. Alex Carrie (58) helped the home side reach 189-9 before the visitors held their nerve in a close finish to win with four wickets but only a couple of overs to spare.

Acomb returned to winning ways, having drawn their last two matches, with an eight wicket win at Clifton Alliance. Joe Ashdown (32) was the top scorer in the home sides disappointing total of 104, Mark Bell finishing with 3-11. The visitors wasted little time chasing down their target inside 23 overs, skipper Andy Tute (62) and Joe Dale (37) both remaining unbeaten, a partnership of 79 seeing them home with two wickets down.

Stamford Bridge completed the winning quartet as they won at Hull Zingari by seven wickets, thanks in part to a century from Will Rhodes. The Yorkshire batsman finished unbeaten on 110 and Kevin Murphy made 55 as they chased down the home sides total of 194-9, James Berridge (78) having played the stand out innings for the hosts receiving good support from Jack Storey (28) whilst Matt Beckett (4-48) ensured the target remained within reach.

Two sides still searching for a first victory met at Studley Royal, and that remains the case although the hosts did get the better of the draw with Dunnington. The home side were indebted to Dan Craven (102) and Dan Coad (74) who rescued the innings from a perilous 24-3 with a stand of 146 enabling them to post a total of 198-7, Jake Murphy (4-50) and Joshua Barrett (3-62) sharing the wickets. Craven completed a notable all-round performance taking 4-33 and Yorkshire’s Ben Coad weighed in with 3-16 but neither was able to capture the final wicket, thanks to an excellent rear-guard effort from Jack Bolan (28no).

York II’s visit to Easingwold ended in disappointment despite 80 from Russell Bowry, who shared a seventh wicket partnership of 81 with Ben Horseman in their sides total of 169. James Postill (4-37) and Paul Skilbeck (3-44) were on hand for the hosts to maintain a grip on proceedings, and despite Matthew Hodsdon’s 3-37 in reply the home side won with seven wickets down after Kyle Waite made 64.