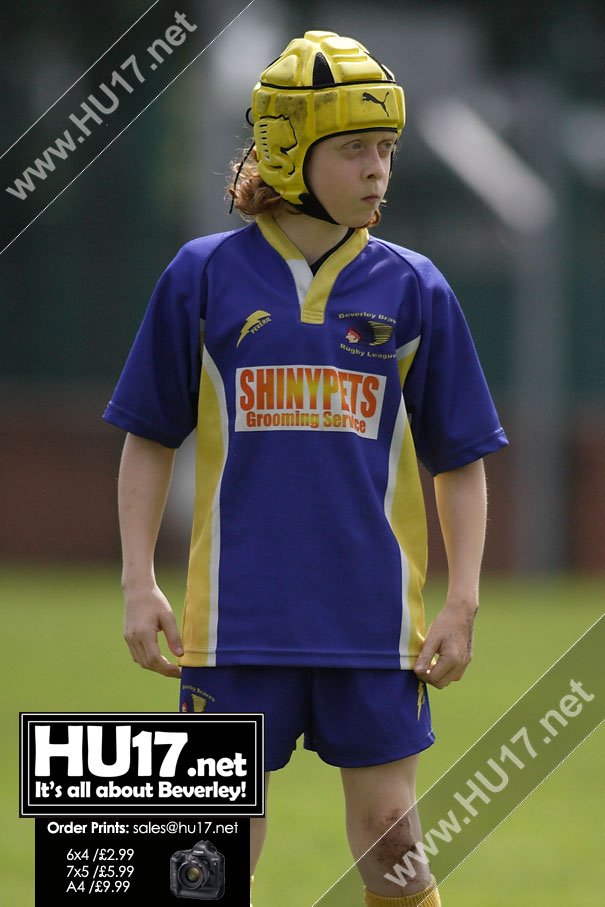 A poor start from Beverley Braves under 13’s cost them dearly in this Vice Presidents Cup Quarter Final. After a couple of Braves errors in their own half Dockers needed no further invitation and scored an unconverted try after just three minutes.

Beverley defended well in each of the next three sets only for Dockers to score on the sixth tackle each time, the end result being a 20-0 deficit with only 12 minutes on the clock.

This was a bit harsh on the Braves, who had put some great defensive effort in particularly from second rows Ethan Rowbotham and Ollie Gresswell and half backs Lewis Egan and Marcus Walker. Beverley desperately needed to break the momentum that Dockers had built, and it came when Walker’s long kick off bounced into touch in- goal forcing the drop out and some much-needed possession.

It was time for the Braves to build some pressure of their own, prop George Bennett-Teare took the ball up well and loose forward Henry Hughes made a huge break through the middle to be pulled up just short but from the resulting play the ball William Wallis managed to burrow his way over for the try.

Jack Turner chipped over the conversion and Beverley were back in the game, and the started to build up the momentum. Josh Pearson, on the field from the replacement’s bench, took the ball up with aggression Ryan Deane and Thomas Cohen combined well on the right side.

The position gained allowed Rowbotham the chance to break cross field before straightening up to dive over in the left corner, Walker’s touchline conversion attempt bouncing back off the crossbar. At 10-20, it was Beverley, who had the momentum but unfortunately for them the half-time whistle put an end to that.

Looking to score first in the second period it was the Braves that found themselves behind the sticks again after three minutes but with the conversion missed it was far from game over. Once again, Beverley made their way down field well, Turner’s distribution from acting half back keeping the ball moving well and Matt Brown, back on the field after a break started to make good yards. Egan looked for a gap close to the line, and the ball found itself in the hands of Bennett -Teare who ran a great line to score, Walker’s conversion and there were just eight points in it at 16-24.

Defensively the Braves stood up well, Wallis working hard and Ben Hodder putting in several brave last gasp tackle at full back whilst Will Kirkup had limited opportunity on the left wing but did all he needed to when called into action. With three long term injuries and two players ill, the Braves are struggling for numbers and with only one replacement they naturally tired with Dockers scoring three more tries, two of them in the last three minutes which perhaps did not do justice to the Beverley performance.