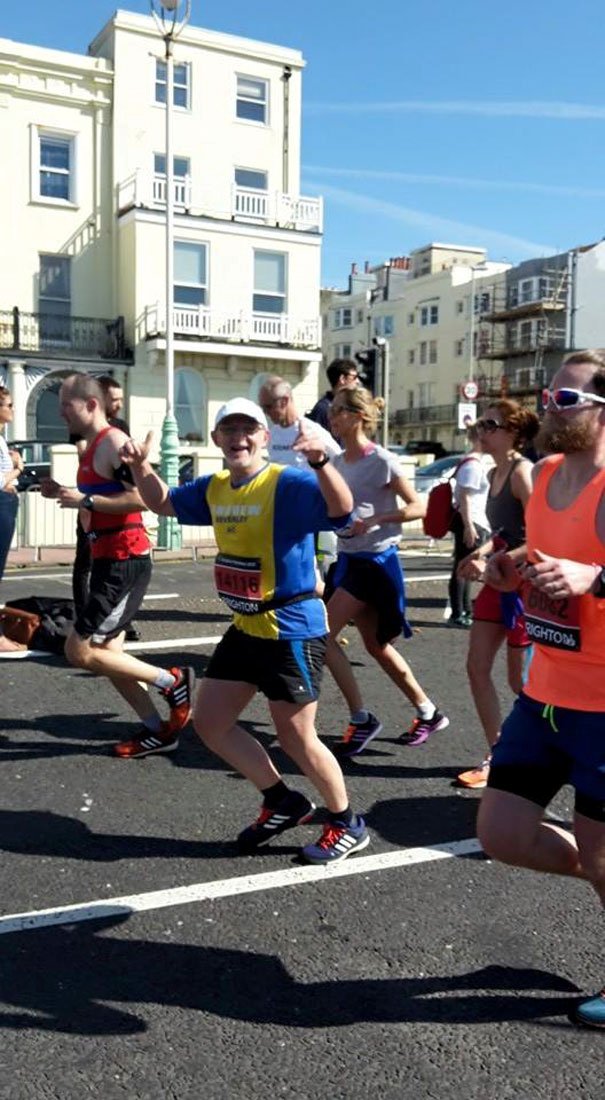 The last 2 weekends have been a busy time for Beverley AC’s distance runners at a number of events across the country.

3 members went down to the Sussex Coast to run the Brighton Marathon. Debutants at 26.2 miles, Edward Lisney and Mark Sykes-Cook were hoping to break the 4 hour barrier so prized at this distance and achieved their goal. They have supported each other in training and covered the course together and were delighted to finish in 3:56:08, which placed them in the top 15% in the race. Andy Grainger’s time of 4:15:25 was a little slower than last year but he was happy with that as early training was badly affected by a couple of bouts of illness.

Meanwhile in Paris, clear blue skies and temperatures well over 20 degrees saw Jim Harbidge smash his PB by almost 10 minutes in a time of 3:44:56 at The Paris Marathon. He was helped along by a kiss from his wife at the 30k mark and a glass of red wine from an official feed station at 40k!

Andy Johnson meanwhile travelled over to Ireland to run the Connemara Marathon. The day comprises 3 separate events; a half and Full marathon and a 39.3 mile ultra-marathon, taking in some of Ireland’s most beautiful scenery around Killary Lough and the Maam Turk Mountains. Andy did well in this challenging environment to pull off a time of 3:33:51.

On the previous day, Mike Blamires, the club’s ultra-marathon specialist, had taken on the Woldsman 50 miler. He was pegged back a little by a pain in his right hip adductor but nevertheless battled on to finish in 9 hrs and 45 minutes; not his PB but good given the injury.

The following week saw the Greater Manchester Marathon take place. Paul Furness was running in his first marathon. He paid tribute to many of the club’s members for the help they gave him in his training and to all those who volunteer for the club. He was on course for a sub 4 until the dreaded wall hit and saw his legs call time, though he still achieved a very creditable 4:14:52.

One of those who helped him in his training, Fiona Oakes was due to run also but a disastrous accident whilst cycling in Arran in Scotland which saw her air lifted to Kilmarnock hospital with horrendous deep wounds to her legs, prevented her from running. Lynne Stabler was also running her first marathon and was delighted with her time of 4:39:10. Chris Peach came 308th in the V45 category in 3:41:55 and Rebecca Burge pulled off 204th in the Female seniors in 3:38:18.

This all builds up nicely to this weekend’s London Marathon, which sees a number of Beverley runners join the crowds for this great event.