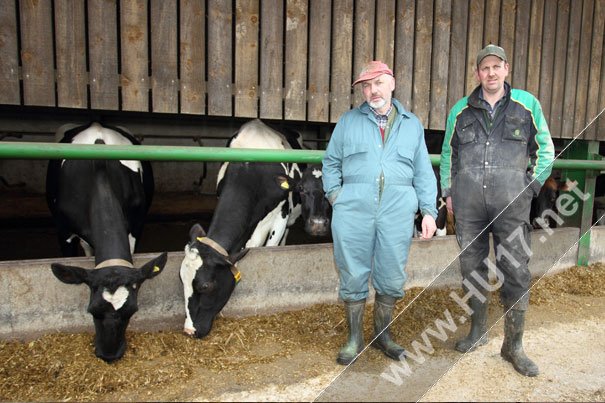 A local family of dairy farmers say that MP Graham Stuart showed he could milk cow after they invited him to visit their farm in Cherry Burton.

Peter, Judith and their son James Waring offered the MP for Beverley and Holderness an opportunity to come to their farm after seeing a story in the news by a former Labour Minister challenging Tory MPs to prove they could milk a cow.

Mrs. Waring was delighted that Graham too her up on the invitation to come to their family farm and try milking one of their 160 cows.

Mrs. Warning said the MP looked every part the farmer and was not afraid to get stuck in she told HU17.net;

“Graham did very well. He was not frightened and proved he could milk a cow. We were very pleased he came to visit us.”

His visit to Field House Farm has also helped highlight the issues faced by the Waring family and many other farmers who are finding the product they produce is being under valued in the market place.

“We discussed the desperate situation in the dairy industry at the present time, and about receiving far less than the cost of production for our milk.”

Currently the Waring family produce 3 to 4000 litres of milk each day. Based on the current market value they are paid just 20p per litre of milk, but that price looks as if it will fall to 17 or 18p soon.

As family, the Waring’s have been producing milk for over 50 years but say their product is being devalued by super markets who use milk as a loss leader to get customers into the shop.

With large retailers like ASDA selling consumers 4 pints of milk for just 89p, which is 30p cheaper than it was some 20 years ago even though every other cost has increased.

It is clear that a product used by nearly every house in the UK is being sold at a loss with hope shoppers will pick up a more profitable item off the shelves during their visit.

Mrs. Waring and other farmers are the ones being left to pick up the pieces as they try to make ends meet and balance the books, she said;

“If you ask the big super markets what they pay farmers what they pay for milk they will tell you it’s 32p a litre. That is simply not the case. There is a select few who get paid this amount, but the reality is most of us are paid far less.”

“When you say you are struggling to make ends meet, we are told that we should milk more cows and produce more milk. By doing this all that happens is that the market ends up with surplus stock driving the price down.”

While in the East Riding there is a big drive of buying and supporting the local shops and the local produce industry through a number of funded schemes, it seems milk and its production is simply overlooked.

It has been 25 years since milk produced in farms around our area was processed in Beverley, but a return to local processing would be a move welcomed by the Waring’s who say then consumers would know exactly where it came from.

Thompsons Dairies closed its doors in the 1990s and now milk produced in Cherry Burton is sent to Leeds and in some cases London by road to be processed before it even gets onto the shelves in shops all of which has big impact on the environment.

First established in 1882 Thompsons Dairies was as a small-scale operation in the yard of 97 Keldgate, Beverley. It later grew to become the chief supplier of milk and other dairy products in the Beverley.

As a business, they had 16 rounds in Beverley, eight in Pocklington and five of school milk until Margaret Thatcher stopped it in the 1970s.

I asked the family if they had considered opening a plant and processing their milk on site but was told the costs involved were too high.

For now, the family say all they can do is hang in there and hope that things improve and the price increases. For us as consumers, I guess we are also responsible for the impact the farmers in our town are feeling as we chose price over ethics when we go shopping.

The question we all need to ask ourselves is this, would we all be prepared to pay a higher but fairer price for our milk if we knew it was made locally and support our local farms, history sadly suggests not and if that is the case, then our dairy farmers face a very bleak future.